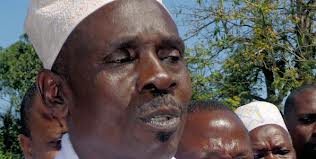 Three people including Kombani Assistant Chief in Kwale have been reported killed in a crackdown on Mombasa Republican Council (MRC). Two of the three were killed in a heavy gunfight near the home of MRC leader Omar Mwamnuadzi at dawn of today â€“Monday, the other is an Assistant Chief who was hacked to death by a mob believed to be MRC followers.

38 people have been arrested in the ongoing crackdown on MRC, Â Kwale OCPD Richard Mugwai confirmed the arrest of 35 men and three women including wife of Mr Mwamnuadzi. The suspects will be arraigned in court later on Monday

The OCPDC said the two killed were bodyguards of the MRC leader, the two blocked the road leading to the home of Mr. Mwamniadzi, and they attacked police using a petrol bomb that did not explode. An exchange of gunfire ensured resulting the two deaths deaths and two others injured.

The Kombani Assistant Chief was hacked to death in what police termed as a revenge attack by the MRC mob following the arrest of Mr Mwamduadzi. The Assistant ChiefÂ  might have been viewed as a traitor by the MRC sympathizers the local District Officer told reporters.

Mr Mwamnuadzi went into hiding since the police started an operation targeting gangs in coastal strip over a week ago.

Mwamnuadziâ€™s arrest follows the ongoing probe on political leaders and financiers of MRC by the police in an effort to contain the gangâ€™s criminal activities.

Meanwhile internal Security Permanent Secretary Mr Mutea Iringo assured Coast people that the government is determined in ensuring their safety and peace and warned those funding the group of dire action.

Top government security officials will be touring the region to enhance the message that Nairobi is in control.