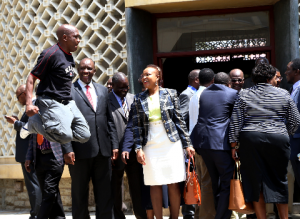 An arrest warrant has been issued against Kakamega Senator Bonnie Khalwale and Budalangi Member of Parliament for allegedly being behind a mass protest earlier on Thursday dubbed “occupy parliament” against the Security Laws (Amendment) Bill 2014.

The two were arrested earlier in the day outside Parliament alongside Bungoma senator Moses Wetang’ula just as the protest on the Bill began. Amendments to the Security Laws were passed in Parliament on Thursday evening amidst chaos as MPs in the National Assembly resorted to kicks and blows during the debate.

“We will will resist dictatorial tendencies in kenya with the new jungle laws.A baseless Warrant of arrest will not intimidate anyone . Freedom is coming ! ” Khalwale said through his tweeter handle.