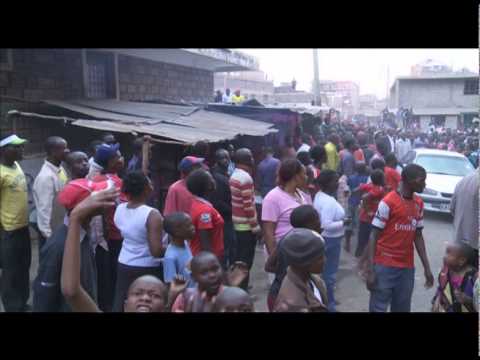 A woman is admitted at the Mama Lucy Hospital after she was beaten up and stripped naked by goons in Kayole over claims she was indecently dressed.

The woman was at a bus stop at Mihango area when she was attacked by a group of young men who accused her of dressing indecently. This prompted a confrontation that saw her stripped naked and roughed up.

Police arrested scores of youth at the stage.

The fresh intimidation of women comes barely a day after women staged a demonstration in Nairobi against stripping of women. The woman was stripped at Embakasi matatu stage last week.

A police officer in Kayole, who is not allowed to speak to the media, said “the lady was stripped in Mihago bus stage this morning. So far we have arrested 10 men.”

Cases of stripping women have recently increased especially in major cities prompting campaigns to stop the vice. People on social media expressed their anger and frustration in regard to the stripping incidence

“These story I think is now becoming a dancehall song to somebody…justice must be done to that…huh,” tweeted Jimmy Wachina.

Dennis Odhiego tweeted “s any sane person in this gvt watching or listening to this?how many cases will catch the attention of this gvt? God help women. ”