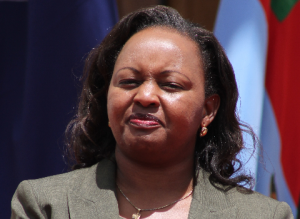 As president Uhuru pitches tent in Washington with a 40 plus delegation armed with a begging bowl, it has now emerged that Devolution and Planning Cabinet Secretary Ann Waiguru is frustrating efforts of the same American donors to fund projects in Kenya.

For a fifth time, she has refused to sign USAIâ€™s new agreement. This has frustrated the External Resource Department team at Treasury that has been urging her to sign.

Most of USAID money is channelled directly to projects being implemented by the local and international NGOs. It is worthy to note that USAID is the single largest donor to Kenyaâ€™s healthcare.

Due to the current grandstanding, most ongoing projects face an imminent closure, reverse of the gains so far made, loss of jobs and a big blow to the thousands of patients on free ARVs who have been depending on the USAID supply. Talk of dying Jubilee babies in the slums and villages who require essentials supplied by the USAID funding.

Her argument has been that this money should be channelled through the government. It is not lost to many observers and ordinary Kenyans on what happened with DFID FPE funds that public officers embezzled forcing taxpayers to shoulder the burden in refunding the looted cash.