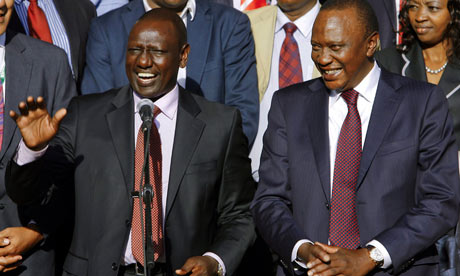 The celebratory mood inside government seems to be at its all time high. A country’s new diplomacy has forced the ‘world’ to bend its rules, procedures and judicial language. At the ICC, Kenya forced a raft of changes which hopefully inches closer to letting President Uhuru Kenyatta and Deputy William Ruto off the hook.

Little is coming out on the fate of the other third accused, the journalist. However, the court of public opinion which indicts, tries, convicts or releases its suspects purely on emotions and logic has it that Sang is a very lucky “short man”.

“It is unthinkable”, my friend says, “that Joshua will remain at the ICC if the court freely let’s Uhuru and Ruto (sorry President Uhuru and Deputy President Ruto) walk away”.

Kenya’s lead diplomat, Amb Amina Mohammed, is convinced that her team, which included amicus curie Prof Githu Muigai and Artoney General Keriako Tobiko, has finally Â made a mockery of this whole thing of the ICC being the last court of resort.

“The ICC has been telling us that our president and his deputy are mere suspects at the court and should be treated as such. Not anymore after this amendments,â€œ she says.

What is more demeaning, to be referred officially as “President Kenyatta” while seated pensively in facing judges and prosecutors over dubious crimes? Methinks “Mr Kenyatta” or simply “Kenyatta” is better!

For the amendments and the diplomatic win over the ‘neocolonizers’, Amb Amina deserves accolades. Our is a country very peculiar.