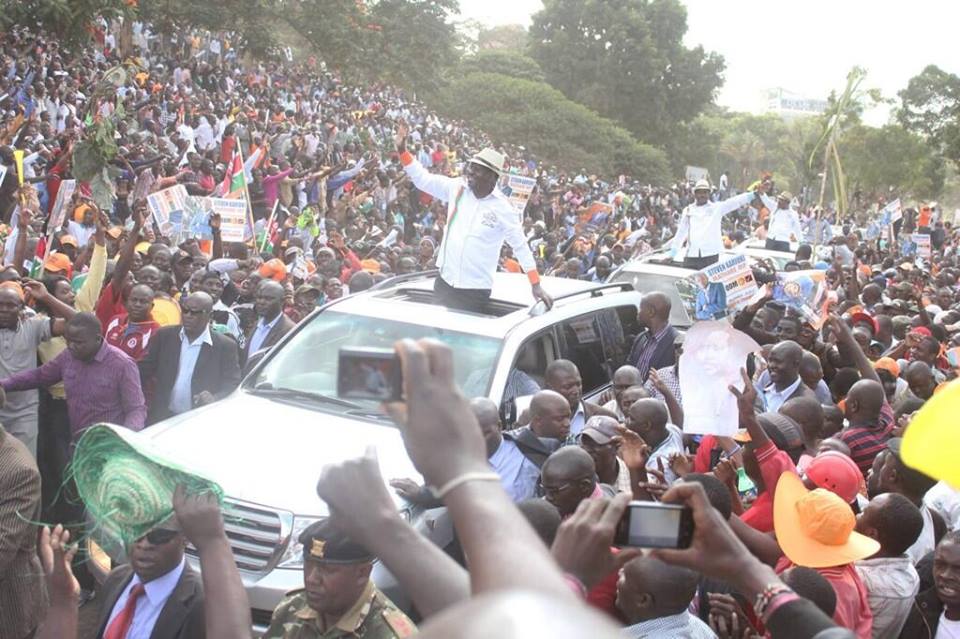 Dear Kenyans,
I am glad to be back after a three month sabbatical during which I had an extensive tour in the United States of America. I gave speeches in universities and colleges and to communities across America.
I bring greetings from the country of Barack Obama Junior to the land of Barack Obama Senior.

I thank the people of Kenya for turning out in such multitudes to welcome me and Ida back home. I will never forget this day. I thank Stephen Kalonzo Musyoka and Moses Masika Wetangula, Anyang Nyongo and the entire CORD fraternity for their support and for leading our team so ably and ensuring that we remain united and intact.

In the three months that I have been away, Kenyans daily communicated their frustrations to me via email, SMS and phone calls.
A baby was shot in Mombasa and his mother killed, part of the growing victims of insecurity that has claimed young and old, Women and children.

The cost of living soared.

While we were away, billions of Kenya shillings were digitally and electronically transferred to agents of impunity before Kenyans could wink. And when we winked there were yet more claims of billions from us.
Tourists left Kenya in droves. Hundreds of our people lost jobs thanks to growing insecurity and hopelessness. Devolution came under heavy attack.

Governors live one day at a time and money is not flowing to the counties as required by law. While we were away, the State Law Office or the Attorney Generalâ€™s Chambers ceased to host lawyers. It became the place for surgeons and morticians.

To all Kenyans who spared their hard earned money to call, text or email me on the State of our Nation, I heard you.

I thank you and I wish to respond to your petitions.

We must take our country back from those who are ruining it for ALL Kenyans.
On 27th August 2010 the Constitution of Kenya was promulgated.
On that day we declared that all sovereign power belongs to the people and no temporal power or authority will ever again tower over or above the might of the people.

The Constitution was never enacted as an instrument for the convenience and comforts of the state officers or elected representatives.

It is you, the people, who have the power to determine the form of governance in this country.
So today, on the eve of Madaraka Day, on this momentous day, we must rededicate and commit ourselves to the promises and ideals of our Constitution.

To bring political reforms in Kenya was never easy. And to bring positive and decisive political transformation will be even harder.

What is happening in Kenya today is not a true reflection of the ideals and promises of our Constitution.
Unless we exercise our sovereign power as a people under the Constitution and take charge of the affairs of our nation today, hold our destiny in our hands and, take control of the duty to defend our Constitution, our miseries and tribulations will soar to unbearable proportions.

So I repeat: we must take charge of the affairs of our nation today, hold our destiny in our hands and, together, take control of the duty to defend our Constitution.

CORD believes in one Kenya, indivisible, proud and free, where each and all of us are our brotherâ€™s keepers.
Nobody should feel excluded or suffer from the excruciating pains of negative ethnicity or any form of discrimination.

We believe in the wealth of our diversity and the richness of our languages and cultures.

You find CORD in every region and corner of the territorial length and breadth of Kenya and in all its territorial waters. CORD is everywhere and is truly national.
We in CORD know the value of nationhood, we have not learnt and will never learn the game of ethnic or racial exclusion or how to surrender to religious bigotry or to endeavour to create a kleptocracy.

We believe that our fortitude will depend on how we take care of the weak, the minorities and the marginalised. Kenya detests and has no room for tribalism in all its adverse manifestations.

Security has become the biggest problem in the country. Besides terrorism, which we condemn and abhor, the lives and property of all Kenyans are in danger. No spot is safe.

The intelligence capability of the security sector has failed. The assets and equipment of the disciplined forces do not have sufficient upgrade.

The causes of the security lapses would have been known if an objective analysis and lessons could have been drawn from the TJRC report. But it was discarded and demonized.
The government declined to establish a judicial commission of inquiry into the circumstances surrounding and leading to the Westgate terror attack.

And so, instead of undertaking the hard and disciplined fight against terrorists, our government has singled out an entire community to scapegoat and persecute. This MUST stop immediately.

Under the Grand Coalition Government work started on a comprehensive blueprint to be approved and adopted as a national security policy with clear aims and objectives and a clear operational framework and structure. This too has been discarded. All we see is a cavalier incompetent and ad hoc challenge to terrorism and general insecurity.

The security sector needs a complete overhaul.
We stood with the nation when the Westgate Mall was hit and we shall continue to do so as CORD.
But we believe our safety will never be guaranteed if the security sector is led by individuals who are more interested in their personal welfare and keeping their jobs, rather than in defending the country. The security of the country must be in the hands of the best men and women for the job.

Unemployment is rising.
More than 10,000 jobs have been lost in the tourist industry alone.
Everywhere â€˜things are falling apartâ€™. There are still no laptops. Many projects have stalled since the Grand Coalition Governmentâ€™s tenure ended. Government has become one huge experiment without a cogent scientific formula or coherent policy.

The economy is shrinking in real terms and the future is therefore bleak. The networks of corruption have become extremely active. We hear warning to the corrupt, but we see none sacked or arraigned in court.

And as leaders milk this country dry to fatten their own bank accounts, prices soar out of the reach of ordinary Kenyans since money is being siphoned away from service delivery.
We must stop this downward spiral not tomorrow but now!
Otherwise there will be not future for ANYONE in Kenya.

I never really want to talk about the IEBC. If ever there was a doubt about the electoral fraud in the conduct of the last presidential elections, the facts are now out there for everyone to see and evaluate. There is no way there can be free and fair election conducted by the IEBC as currently constituted which can meet the constitutional test- impartial, neutral, efficient, accurate and accountable.

This IEBC is busy fighting for its life in criminal courts; election courts and is under probe by both state organs and non-state actors. It must be retired.

Kenya has become one of the most dangerous places to live in Africa. Change we must have. To paraphrase President Obama, â€œChange is coming to Kenya.â€
CORD bears no arms. We have no army. We will recruit no army to bring change to Kenya. We believe in Article 3(2) of the Constitution, which states â€œany attempt to establish a government otherwise than in compliance with the Constitution is unlawfulâ€. I cite these provisions not that CORD needs to know, but it is the IEBC and Supreme Court which need to comprehend this fundamental constitutional tenet.

Lest we forget, there was once a Constitution, which provided that there shall be only one political party in Kenya known as KANU. That the Constitution created an imperial presidency, which could dissolve Parliament at will and hire and fire judges of the High Court and the Attorney General.

Without a bullet but with a ballot we repealed that bad Constitution. Who can be mightier than a people united in truth and justice?

Who can be against us when the Almighty, Allah, is on our side? How can we fail when we are on the right side of history?

Letâ€™s not be faint hearted. Kenyans, arise and defend the motherland in pursuit of freedom and happiness. The time for change is today. The time is now. The train for change is leaving the station from here, in Uhuru Park where many campaigns have started, ended and succeeded.

And therefore after extensive consultations with my brothers, Stephen Kalonzo Musyoka and Moses Masika Wetangula and the entire CORD fraternity, we have arrived at the first steps towards bringing healing and justice to our land, which I wish to propose to you for your approval.

Kenya must hold a national dialogue at a convention consisting of all the major political coalitions represented in Parliament with the participation of representatives of civil society, religious denominations and workers organizations within the next sixty days from today. Preparatory talks should take place between the Jubilee Coalition and the CORD coalition to agree on the agenda and timetable for the national dialogue. The preparatory talks will also have the responsibility for dealing with the most immediate and compelling problems facing the country including high cost of living and insecurity.

CORD will demand that the following be part of the overall agenda of the national agenda.

1. Cost of basic necessities.
2. Peace and security for the land and the review and reform of security organs.
3. Implementing and empowering devolution and those county governments get their equitable share of national revenue.
4. The electoral system and process and the overhaul of IEBC.
5. Eradication of corruption.