Boniface Mwangi IGNORANTLY claims in his twitter feed that “……….President @UKenyatta is winning hearts in Kibera slowly & doing something @RailaOdinga rarely does walking in Kibera.……..”

For Boniface Mwangi’s information, Raila Odinga is in Kibra Constituency every other fortnight, and despite not being a public servant or elected MP, tours all regions of Kenya every other day It seeems to me Mwangi’s activism has now morphed to @ss licking,

What Mwangi was praising was only a second visit by the Head of State to the peripheral of Kibra (Mbangathi/Highrise). Mind you, Kibra, consisting of five electoral wards, is just but one of the more than 30 informal settlements of Nairobi. Which ones has Uhuru walked through?

Furthermore, Raila Odinga is on record having implemented a slum upgrading scheme despite the odds of being a child of the opposition. What has Jubilee or even KANU that gave birth to them done to help our people?

For the benefit of those who ignorant like Boniface Mwangi here are some iconic images of Raila Odinga mingling with his people. I am not sire if Boniface Mwangi can spot him.These photos were taken in different settings in the last two months. Where was Uhuru during this time? Purchasing high-end armoured vehicles to ride in and imposing VAT on essential commodities to make life unbearable to our people.

Sample the pictures below to see previous Raila’s impromptu visit to Kibera’s ground zero not just at Nyayo highrise or near the DO’s office where Uhuru visited the Waiguru projects. 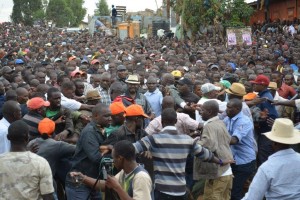 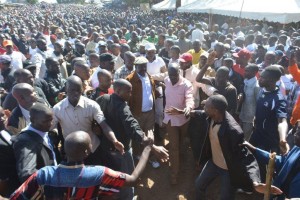 Roger that, and that is a surprise visit!

Uhuru should put his hands to work, visiting Kibera is not a goal BUT delivering development is a goal Kenyans want him to fulfill!