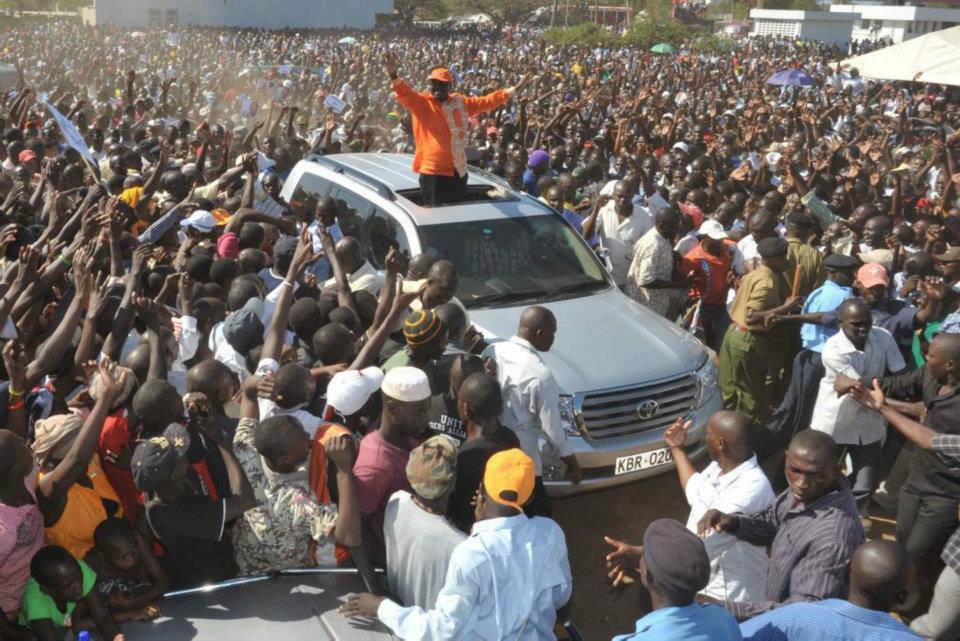 It is highly likely that the Jubilee government allowed the CORD rally so they could stay in power. Â In a sense, it also extinguished what could have precipitated to a ‘revolution’. For a government still suffering reputation issues at home and isolation abroad, denying CORD the right to assembly would have been captured in diplomaticÂ cables being wired back to the Western world with the refrain being: Kenya is degenerating into a dictatorship!

Did you ever wonder why President Uhuru Kenyatta, his Deputy William Ruto and Inspector General of Police David Kimaiyo beat the retreat on the ban that was imposed on the mother of all homecomings.

Simple. They prolonged a nasty confrontation whose results would have been very catastrophic to the Uhuru regime itself.

The duo are very smart and cunning, they had some clever political scientists holed up somewhere studying the CORDâ€™s script and found that it bears all the hallmarks of The Arab Spring and this was not the time to be lackadaisical to get their eyes off the ball to repeat the mistakes of Mohammed Bouazizi, Mubarak and Gaddaffi.

Denying the poor, unemployed and bitter multitudes of people their only channel of ventilating their frustrations was going to be not only counterproductive but acutely catastrophic.

Just like the trigger of Arab Spring in Tunisia, it could lead to a type of â€˜self-immolation by a fruit vendorâ€™ or in our case â€˜Mama Mbogaâ€™ who is fed up with the corrupt city council askaris to set off an unstoppable flames of freedom that would be â€˜The Sub-Saharan Springâ€™.

Check out the following rafts of swift tactics the government has deployed to hoodwink the irate Wanainchi of the #BabaWhileYouWereAway fame to diffuse the Â momentum building up to a countdown to â€˜Babaâ€™s homecoming.

Itâ€™s like a sequel, so well choreographed with pin point accuracies to dupe the less discerning but not such to the wise. In the listed scenarios here, one just needs to step back to notice that there are no separation of powers in different arms of government.

Firstly, on the Anglo Leasing payments that have irked all Kenyans from across all the political divides; at the appeal court yesterday the AG was not present to proceed with the hearing to honour the 3.05 Billion â€˜pendingâ€™ payment to a ghost figure going by the name Anurra Pererra.

State Counsel Waigi Kamau told the court that the Deputy Solicitor General Ms Muthoni Kimani was not available to argue the case because she had been served with the application by LSK. What a coincidence or how shrewd is this.

On police brutality, apparently the Laikipia county security team will now investigate and prosecute police officers who ordered violent dispersal of peaceful demonstrators in Nanyuki town on Tuesday evening. This is really interesting from a police force with a history of cruel notoriety.

Jubileeâ€™s rally cancelled. The reason and the sudden change of tone for withdrawing from what was building up us the battle of the titans; leaves a lot to be desired in the minds of inquisitive folks.

Hear this â€œWe want our counterparts in the opposition to have a chance to welcome their leader and we wish them well in Uhuru Park or any other venue that they will be given,â€ Duale. What!

Dirty tactics, a climbing down of an opposing protagonist in a competition can be understood but to generously dish niceties such as were said by Duale are highly suspicious.

The Punch line is in the Senate Majority leader who seems to be sure like â€˜a stage managerâ€™ that there will be incitement and violence. He said â€˜we have told the IG that we expect his men and women to be vigilant and track down all politicians who might be inciting Kenyans to violence and we hope that he has heard us,â€ Kindiki warned.

The psychological warfare aspects of this political competition are full of intrigues with twists and turns by every side trying to outmanoeuvre one another.