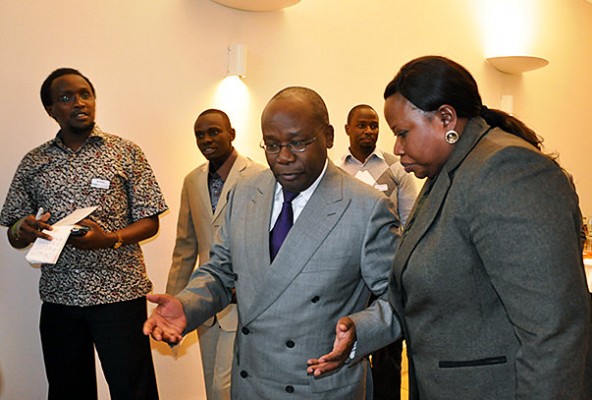 In the picture AG Prof Githu Muigai, ICC Prosecutor Fatu Bensouda and Star journalist Nzau Musau at the ICC in the Hague

The AG Prof. Githu Muigai will mid-February head to the ICC to respond to legal questions regarding prosecution witnesses in the Ruto case who have since become unavailable.

The witnesses, according to our source, are believed to be part of those who were coached by “Ruto fixers” – the PNU government functionaries who were recently alleged to have provided damning evidence against Ruto, then an ODM/opposition politician.

Githu will respond to by the court requiring him to file a response and appear at the hearing of a motion by the prosecution in the Ruto-Sang case requesting the court to issue witness summons to ICC witnesses in Kenya who have declined to travel to the Hague and testify at the trial.

Elsewhere, a new opinion poll indicates majority of Kenyans want the case against President Uhuru Kenyatta dropped. Following admission by ICC prosecutor that she did not have adequate evidence to try president Uhuru, 6% of Kenyans support the dropping of Uhuru’s case against 39% .

A further 57.6 % believe the trials is a waste of time and resources that otherwise be put to use in developing the country. The polls, conducted by Strategic Africa between 21-24th January, also see economic crisis as the biggest worry of Kenyans.