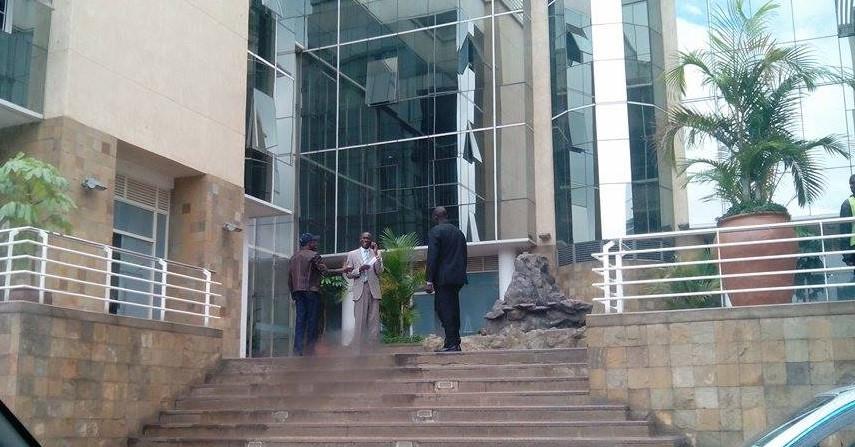 PICTURED: Hon Ababu Namwamba (in brown leather jacket) seen entering Capital Hill Square a short while after landing at JKIA from Mombasa to seek a face-to-face meeting with CORD leader Raila Odinga who over the weekend reportedly declined to take calls from Ababu and Magerer who had chosen to address him via the press.

Reliable source confirmed that some remnants of the moribund “Team Fresh” spent some time at the registrars office seeking availability of names such “ODM fresh” and “Okoa Kenya” and they seem not to have succeeded and theregore running back to baba is a viable option as they navigate the treacherous mucky waters of going against the people who elected them.

Public firestorm and the ground situation in Budalangi may have forced Hon Ababu Namwamba to prematurely conclude his holiday at the coast and fly back to Nairobi straight to Prime Minsiter Odinga’s CORD secretariat at Capital Hill Square to plead with the his boss/Raila. Prime Odinga was was held up in a series meetings throughout the morning to ealier afternoon and therefore was not possible to see Ababu at a short notice.

Ababu had to wait for long and as we make this update he was still waiting. It is yet to be confirmed the agenda of Ababu seeking such an impromptu audience. Ababu had called Prime Minister since Sartuday and it is said that Baba was reluctant picking his calls.

The presumed leader of the moribund Team Fresh seeks may be seeking to mend fences once again…. but for how long?