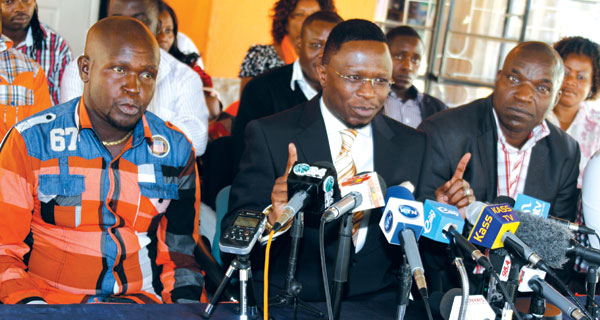 Budalangi Member of Parliament, Ababu Namwamba, on Tuesday tore Senate Majority Leader, Prof. Kithure Kindiki into pieces during a debate on Citizen TV on the State of the Nation which pitied CORD against Jubilee.

Namwamba exhibited his mastery of the English language combined with the general knowledge on the politics of the day and beat Kindiki ten-nil on problems facing Kenya and possible solutions, putting the academic credentials of the law Professor to question

Namwambaâ€™s eloquence left Kindiki looking like he obtained his degree from the infamous River Road not to mention his students.

The ODM legislature eloquently pinpointed loopholes in the Government of President Uhuru Kenyatta and his Deputy, William Ruto, in addressing pertinent issues facing Kenya, among them, insecurity, corruption, ethnicity, high cost of living and electoral malpractices in the country, and which formed the basis of CORDâ€™s call for a national dialogue.

Kindiki was forced to lie especially on insecurity and ethnicity where he said Kenya was safe and that ethnicity was a 50-year old thing which cannot be credited to the Jubilee Government.

However, Namwamba caught him red handed, saying Uhuruâ€™s move to acquire amoured vehicles to protect himself from Al-Shabaab was a clear indicator that we have a security crisis in the country and that Kenyans are not safe.

Likewise, the disquiet in the Jubilee Government over the arbitrary sacking of Kalenjins and replacing them with Kikuyus is enough proof of how ethnicity has taken root in the Jubilee administration with Uhuru/ Ruto as the key masterminds of such tribalism.