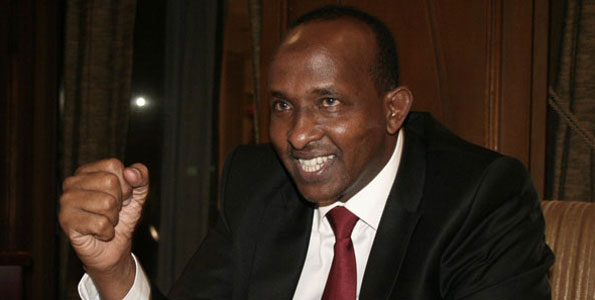 House Majority leader Hon Adan Duale is on the spot over his refusal to cancel a planned TV interview to join ‘his’ people following the killing of more than 30 people in Wajir. As a senior most official from the Somali community hon Duale should have joined the people of Wajir in mourning those Killed.

”Duale is a busy man in Nairobi, he has taken over the role of a Raila abuser in chief, he could simply not missa TV interview to vilify Raila Odinga. Duale is busy serving his secondary masters in Nairobi at the expense of those who elected him” a fellow Somali MP who requested anonymity told this reporter on phone.

Here is the report on the Killings as was reported by the Standard.

WAJIR COUNTY: At least thirty people were killed and 13 other seriously wounded, after two clan militia confronted at a village in Tarbaj, Wajir County. The deadly clash was pitting heavily armed Degodia and Garre militia according to a senior government official.

The incidents renewed hostilities between the two rival Somali clans, whose latest disagreement, was sparked off a month ago, following a dispute over 3 kilometres border stretch. The epicentre of the fierce fight between two militia groups is a place called Kulani by the Garre and Gunani by the Degodia.

Confirming the incident, Tarbaj deputy county commissioner David Rotich said twenty of those who were killed were combatants comprising of both sides in the conflict. Rotich who said the fighting started at around 6.30 am on Sunday said so far this was the deadliest confrontation since the conflict broke out in Wajir between the two clans in April 15. He said 8 of those injured in the conflict, in which sophisticated weapons were used, were rushed to Takaba district hospital, while five others were taken to Tarbaj district hospital for treatment.

Rotich said those admitted at the hospital with injury were possibly members of the fighters since civilians were not expected to be in the deserted village any time soon. The latest death pushes the number of those killed in the inter-clan feuds between Degodia and Garre, both a sub-clan of Haweye Somali clan into 70 according to a Kenya Red Cross official in Wajir County.

Currently, over 12,000 families who are internally displaced in the ongoing conflict re living in IDP camps in Tarbaj and Bulla Hodthan in squalid as more several both primary and secondary are closed. â€œWe highly suspect the injuries who were admitted at both Takaba and Tarbaj hospitals were among the clan fighters. We had no a single civilians in Gunana since the villagers fled the area three weeks agoâ€ he added.

Rotich said some of the combatants were gunned down by a combined General Service Unit (GSU) and police officers, who responding to the incident adding that the militias were pushed back by the security personnel.

”The GSU and police officers based in Burmayo location 20 kilometres from Gunani responded to the sounds of the fierce gun fight and managed to kill some of them before they escaped in different directions.â€ He said. He added that security reinforcement had been dispatched from Tarbaj, 198 kilometres from the incident location as another team of top security officials and extra soldiers were preparing to go to the area shortly to assess the situation and fact finding mission.

National Assembly Leader of Majority Aden Duale who is busy in Nairobi with abusing former Prime Minister Raila Odinga sent a condolence message to the bereaved and urged leaders to seek long lasting peace. â€œWe must not shed blood of our people. The political and religious leadership from North Eastern must come together and preach peace among the warring clans. The Government security agencies must move with speed to provide security to the affected areas,â€ Duale said in a statement.

Duale could NOT cancel his lined up TV interview to the villages to see his people, he is busy serving his secondary masters in Nairobi.