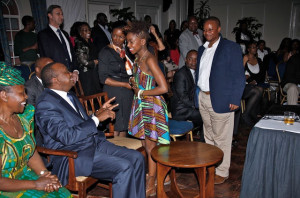 There are many definitions of socialite, but this seems to describe our president better â€“ A socialite is a person who is well known in fashionable society and is fond of social activity (web definitions).

President Uhuru is definitely well known, and is now getting fond of social activity. First it was Groove Awards, then he went to Impala Club to watch Kenya 7s play their semi final match. Then last night, he attended Miss Karunâ€™s (formerly Camp Mulla) listening party for her new album in Muthaiga.

Some Kenyans now think the president is becoming a socialite, or simply a social elite, in the lines of Huddah Monroe and her sisters.-nairobiwire.com

Last night, President Uhuru Kenyatta attended an exclusive listening party for Miss Karunâ€™s (formerly of Camp Mulla) new album, at Muthaiga Golf Club. This probably makeâ€™s Miss Karun the first artist whose album launch the president has attended. The private ceremony was for friends and family, and it turns out the president is family. Unconfirmed reports have it that President Uhuru is a distant uncle to the singer. Statehouse insider Dennis Itumbi made the announcement of the Presidentâ€™s night out on his Twitter account.