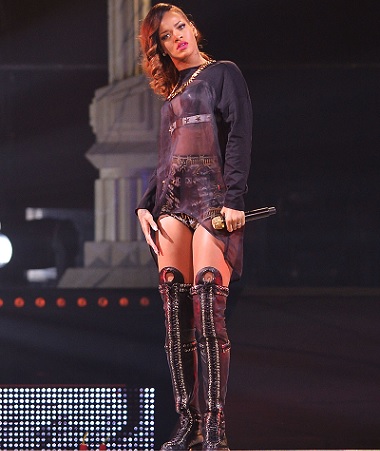 Rihanna and Chris Brown are over, but what was the final nail in the coffin? The infamously back on couple appeared to be on the road to longterm romance despite their very difficult past. However, the two big personalities had a series of short splits before what appears to be a final parting. Hereâ€™s what went wrong.

So did Chrisâ€™ ongoing relationship with ex-girlfriend and continuing â€œgood friendâ€ and business partner, Karrueche Tran finally make Rihanna so fed up she threw in the towel? Not so, reveals a source to both Rihanna and Chris.

â€œWhatever happened, know that Karrueche didnâ€™t play a part in that,â€ the source said. â€œHer intention was never to break up Chris and her no matter how much she liked Chris.Â Rihanna hates Karrueche but she shouldnâ€™t be so angry. Karrueche didnâ€™t do sh*t to herâ€

Instead, the source says that Chris dumped Rihanna because â€œhe got tired of all her crazy ways and her controlling mouth. Karrueche says they used to argue a lot and we all know Chris has a temper. He dropped her because she was too wild and crazy for him.â€

Did Chris Write A Song For Rihanna?

The new question is: does Chris regret his decision to split from the woman who he just recently considered his number one and the love of his life? And does he now believe that Rihanna was pushing him away, when they were disagreeing. His new remix of Marioâ€˜s â€œSomebody Elseâ€ sounds like it could be about Rihanna and his regrets! The lyrics specifically refer to a relationship that he thought was solid, but nevertheless ended.

â€œI never saw the day coming / That you would ever wanna leave me / Baby, you told me no matter what / Your heart would always be for me.â€ Rihanna, you have some explaining to do!

So there you have it: Chris split with Rihanna because the pair, who both have such strong personalities and ideas, couldnâ€™t stop fighting. But he could be having second thoughts the way this pair operates â€” who knows? We could be in for a round three. We wouldnâ€™t rule out another romantic reunion. Karrueche we wouldnâ€™t advise you moving too many of your belongings into Chrisâ€™ house. What do you think HollywoodLifers? Are Chris and Rihanna finally finito for good or not?