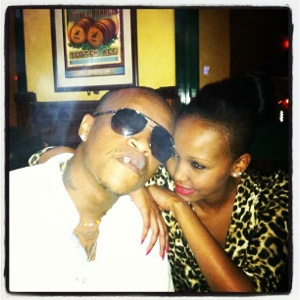 Tears streamed down Huddahâ€™s pretty little face this evening as she wept for her on and off lover back at home.

The young model has a much publicised romantic past with former Big Brother StarGame Housemate Prezzo, he even joined #ProjectSaveHuddah, urging Big Brother fans to vote for the Nominated Kenyan.

Today the Diamond lass started to weep during a heart to heart with Angelo where she talked about missing her man. â€œI miss the way that he kisses me. I miss him biting my neck,â€ she shared with the South African.

The Diamond House dude then quizzed her on whether or not she believes that this man is the one. All that she had to say on that matter is, â€œHe understands meâ€.

She also did not share the name of the man in question but she did disclose that he is a rapper. She also revealed to Angelo that he is someone who has been in a similar situation of being locked up and that he did hook up with someone at the time.

Hmmm, is it a coincidence that Prezzo is a Kenyan rapper that has been in the Big Brother House and he had a stormy on and off relationship with the late Nigerian songstress, Goldie?