By WHERE IS KENYA.COM
We were just going through our archives and thought we would remind you why Jeff Koinange was fired from CNN. Actually, scratch that, he did a horrible interview today so we think itâ€™s entirely appropriate to drag in his past here.

Back in the day, a leading American website quoting official sources has announced that Jeff Koinange is no longer with CNN. This information came after weeks of uncertainty when the most famous Kenyan journalist was off-air from CNN for long stretches of time. At the time, Jeff was CNNâ€™s Africa correspondent.

Jeff Koinange had been involved in two controversial incidents in recent months one where the Nigeria government accused him of paying people to pose for CNN cameras over the Oil Kidnappings in the Nile Delta. The other was a London date rape incident. He raped a grandmother, Marianne Briner who is pictured below: 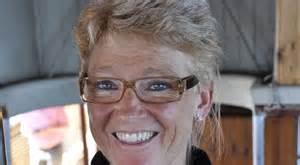 The furious victim Marianne Briner sent off this email letter on Saturday; From: Marianne briner To: jim.walton Subject: jeff koinange â€“ confidential Date: Sat, 3 Mar 2007 23:45:28 +0000 Dear Mr. Walton, I had sent in August last year to Jeff Koinange the official Press Release of my Book â€œA Shining Star in Darknessâ€ which talks about the killing of the former Kenyan Minister for Foreign Affairs Dr. Robert Ouko in 1990.

I had been involved in the investigations and cooperated with Scotland Yard and gave last evidence in front of a Parliamentary Committee in Nairobi in November/December 2004. Jeff replied immediately and proposed to have an interview with CNN in Atlanta and to present the book in Inside-Africa.

Soon after he started to call me and things changed to very private and personal matters. He then sent me by email photos showing him and Mandela (comment: sharing a special moment with a special friend), the photo of the Prix-Bayeux-Ceremony (comment: so now you know about if even before my wife does â€¦) and also some photos showing his Living-Room with his Art Collection (comment: I want you to know how I am livingâ€¦) and then the book about his Grandfather (one copy he sent also to my daughter) â€“ comment: This will give you an insight who I really am and where I come from â€¦ During all this time he kept me also informed about his job, his assignments, either by phone (sometimes 3 â€“ 4 times per day) or by email (here even upto 10 per day) sent from different places like Darfur, Congo, Botswana, Malaway etc. and last from Nigeria â€“ besides the â€˜normalâ€™ ones from Johannesburg.

Especially the Nigerian Report was then also a point of our discussion now in London when he gave me some inside information how he had arranged the encounter with these MEND people (â€ of course I had to pay certain people to get the story â€“ but everything was done in agreement with CNN and in accordance with their usual standards â€“ but you do not get such a story without bribing â€“ you know how the world and especially in Nigeria functions â€“ you have to have financial resources â€“ but at the end it was worth it â€“ CNN has its story and I have my â€˜fameâ€™ â€¦â€¦) The rest of our â€˜encounterâ€™ in London can be read in the attached document. It was nasty and now has turned into an open threat on my life since he warned me that he would give the details of my Spanish address and my Swiss one (where also my daughter lives) to Nicolas Biwott (in my book named Nick Boit).

Especially the last sentence â€˜if I was prepared to â€˜MOVEâ€™ againâ€™ has made me decide to go with whole story into the open. I have to protect not only myself but also my daughter. Here you should know that I am living in fear since 15 years â€“ I had to move more than a dozen times â€“ and John Troon (retired Superintendent from Scotland Yard who at that time was leading the investigations in Kenya and with whom I am in contact since) has just now confirmed to me in London that I am still in danger.

When he heard that I am in contact with Jeff Koinange, he told me in very strict words â€˜you have made a very big mistake to trust a man like him. He will sell you for a good story and also to Biwott â€“ I am even convinced that he has set you up just for this reason â€¦.â€ After what has happened in London I am starting to believe him. But I have decided to fight back.

I have never been a coward and Jeff should know this. Just read his last emails where he is begging me not to disclose anything because it would â€˜destroyâ€™ him. I had given him time until March 10 to come here and clarify things and to assure me of the introduction to CNN â€“ but he has decided to threaten me instead. I have sent the attached document already to Femi Oke together with some remarks Jeff made about her which are very offensive. It should make her a bit careful when dealing with him in the future since he is not the â€˜nice guyâ€™ as he pretends to be.

As I said before, I had hoped to settle his whole nasty matter amicably in arranging the promised interview with CNN and also with Oprah Winfrey whom he had also mentioned would be interested to present my book on her Show. But he has decided not to accept my offer and has started to issuee serious threats against me. I am therefore going into the open and will start my blog under the title â€˜The secret life of Jeff Koinangeâ€

Read more at at WHEREISKENYA.COM: