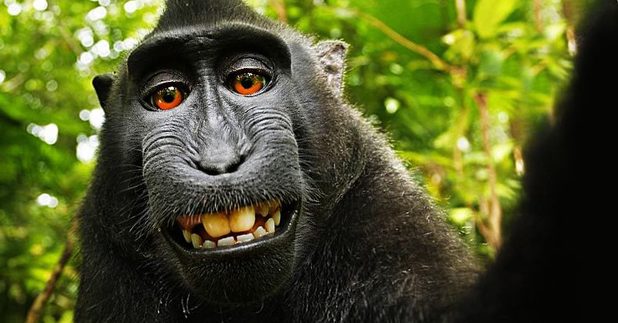 In 2011, nature photographer David Slater travelled to North Sulawesi, Indonesia to shoot the crested black macaques, when one of them grabbed one of his cameras and begin pressing the shutter button, taking hundreds of random photos.

Slater told the Daily Mail that the sound of the shutter going off got the macaque’s attention and she kept pressing the button to hear it again.

Most of the exposures were blurry or otherwise uninteresting, but a few resulted in photos of Slater, of other macaques and, like the selfie above, the camera thief herself.

The monkey selfie made headlines around the world in 2011, appearing in hundreds of newspapers, on TV and online. But when Wikimedia added the photo to its internet database of millions of royalty-free images, Slater saw it as a threat to his livelihood and filed numerous requests with Wikimedia to have the image taken down.

Because of the user-edited nature of the Wikimedia Commons, the monkey selfie has been taken down and re-uploaded several times.

In January, Wikimedia issued its final ruling on Slater’s complaints, saying that the image is in the public domain because “as the work of a non-human animal, it has no human author in whom copyright is vested.”

Now, Slater is taking the matter to court and is facing a legal bill of over $18,000.

On Wednesday, the Telegraph published an interview with Slater in which he characterized Wikimedia’s position as “If the monkey took it, it owns the copyright.”