Three serving soldiers who allegedly set up a militia group within the US army, which plotted to overthrow the government and assassinate President Obama, face the death penalty after they were arraigned on murder charges.

Prosecutors in Georgia announced on Thursday they would seek death sentences in one of the most startling and potentially serious cases of an anti-government militia to be brought before the courts in recent years. They alleged that the soldiers stockpiled almost $90,000 worth of guns and bomb-making equipment which they planned to use to kill the president and carry out a range of other violent acts.

The three accused â€“ Isaac Aguigui, fellow private Christopher Salmon and sergeant Anthony Peden â€“ are all on active duty at Fort Stewart in Georgia, home of the army’s 3rd infantry division. They are accused of having killed in execution style their former army comrade, Michael Roark, 19, and his 17-year-old girlfriend Tiffany York.

Earlier this week another serving soldier, private Michael Burnett, who was allegedly part of the militia, cut a deal with the prosecution in which he pleaded guilty to lesser charges of manslaughter and gang activity in return for turning prosecution witness. He gave evidence in which he said he was present at the murder of the couple on 4 December.

He said he and the soldiers lured the pair into the woods near the army post on pretence they were going for gun target practice. Burnett said he saw Peden shoot York twice in the head while she was getting out of their car, and then witnessed Salmon force Roark to fall onto his knees before shooting him similarly: twice in the head.

According to the chief prosecutor, Isabel Pauley, the militia group called itself F.E.A.R. â€“ Forever Enduring Always Ready. The soldiers had come up with a range of wild and violent plots, including a takeover of Fort Stewart, poisoning apple orchards in Washington state and planting bombs in public parks.

Investigators have given no indication of how serious a threat the militia posed, beyond charging each of the three soldiers with 13 counts including murder and illegal gang activity. Pauley has linked the militia to domestic terrorism, though no terrorism charges have been laid.

She told a court in a hearing on Monday: “This domestic terrorist organisation did not simply plan and talk. Prior to the murders in this case, the group took action. Evidence shows the group possessed the knowledge, means and motive to carry out their plans.”

The potential severity of the threat was dramatised in court in the Atlantic judicial circuit district where the men were arraigned on Thursday. They were brought in to face the charges separately, an hour apart, with armed officers flanking them.

One of the many mysteries about the case is that the militia was allegedly founded and led by Aguigui, 21. Of all the accused, he held the lowest military rank, having joined the army less than two years ago and having never been in combat.

Yet he is alleged to have persuaded superior soldiers to join him in the militia, and then ordered them to carry out the murders of Roark and York.

“You fucking killed my kid!” Wesley Thomas cried out before at least four deputies and officers wrestled him to the floor and handcuffed him. 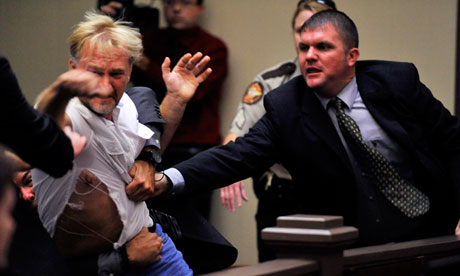 Brett Roark stood in his seat and yelled to the deputies: “Get off him!” and “Let him go!” Both men were led from the courtroom, but neither was charged for the outburst.

Prosecutors have told the courts that Isaac procured $87,000 worth of semi-automatic assault rifles and other weapons as a stockpile for the militia. He is alleged to have paid for it out of about $500,000 he received as a life insurance payment for his wife, another serving soldier called Deirdre Aguigui.

She died suddenly a year ago while pregnant with Aguigui’s son. The soldier has not been charged with her death, but prosecutors have described it as “highly suspicious”.

According to the prosecution account of events, Roark was used by Aguigui as a go-between to buy the guns and bomb components. Last December, Roark left the army, allegedly arousing suspicions of the group that he was going to snitch on them; he was killed two days later.

Now that they face the death sentence, the defendants will be provided with a new set of lawyers with experience in capital cases. Aguigui’s previous defence lawyer, Keith Higgins, told the AP: “At this point, there has been no evidence presented to prove anything. The fact that certain statements are being made does not necessarily mean these allegations are true.”