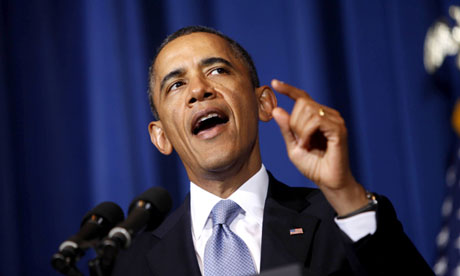 Obama joked about the ambitions of his vice-president Joe Biden and about new secretary of state John Kerry. Photograph: Rex Features

By: Ewen MacAskill for the Gurdian

Barack Obama opened up over the weekend about Joe Biden‘s ambition to be Pope and John Kerry‘s predilection for pantsuits. It was not a rare lapse into indiscretion but the annual dinner of the Gridiron, Washington’s exclusive club, where for one night only politicians and journalists engage in a bit of banter and slapstick.

There are no cameras present but the White House helpfully issues a transcript of the president’s speech at the white-tie dinner. He began with a one-liner about Washington’s budget woes: “I know some of you have noticed that I’m dressed a little differently from the other gentlemen. Because of sequester, they cut my tails,” he said.

It is only Obama’s second attendance at the Gridiron since he became president. Obama, according to his intimates, dislikes such cosy Washington elite establishments. The Gridiron, one of the city’s oldest clubs and with membership limited to 65, is made up almost exclusively of journalists.

But these are unusual times. Having been accused of being stand-offish during his first term, Obama seems more disposed to embrace in his second term the traditional social life of the capital, not least lunching and dining Republican members of Congress over the last fortnight.

Speaking to Gridiron members and their guests, both Republicans and Democrats, Obama joked about the ambitions of his vice-president Joe Biden, who is a potential candidate for the presidency in 2016.

“Even though I’m just beginning my second term, I know that some folks are looking ahead to bigger things. Look, it’s no secret that my vice-president is still ambitious. But let’s face it, his age is an issue. Just the other day, I had to take Joe aside and say, ‘Joe, you are way too young to be the Pope. You can’t do it. You got to mature a little bit.'”

He poked fun too at his new secretary of state, John Kerry. “Let’s face it â€“ Hillary is a tough act to follow. But John Kerry is doing great so far. He is doing everything he can to ensure continuity. Frankly, though, I think it’s time for him to stop showing up at work in pantsuits.”

But most of the one-liners, given the Gridiron is mainly made up of journalists, dealt with reporters.

“Now I’m sure that you’ve noticed that there’s somebody very special in my life who is missing tonight, somebody who has always got my back, stands with me no matter what and gives me hope no matter how dark things seem. So tonight, I want to publicly thank my rock, my foundation â€“ thank you, Nate Silver,” he said of the New York Times pollster who repeatedly predicted an Obama victory throughout last year’s White House election campaign.

On the menu for the 650 guests were ginger-roasted shrimp, sea bass with vintage port sauce, fruit and berry salad and petits fours.

Other speakers included, for the Republicans, Louisiana governor Bobby Jindal â€“ a talked-of presidential hopeful for 2016. Alluding to his own chances, AP reported that Jindal, whose parents emigrated to the US from the Punjab, joked: “What chance does a skinny guy with a dark complexion have of being elected president?”

Obama has been long praised for his comic timing in his annual speeches at the White House Correspondents’ Dinner, which, unlike the Gridiron, is televised, and usually has a team of writers delivering good lines. The Gridiron jokes were not on par with some of his White House Correspondents’ Dinner appearances but there were a few self-deprecating lines.

He made a couple of references to his last press conference when he spoke about being unable to do a ‘Jedi mind-meld’ to force Congress to do his bidding, conflating Star Wars and Star Trek.

“After a very public mix-up last week, my communications team has provided me with an easy way to distinguish between Star Trek and Star Wars. Spock is what Maureen Dowd calls me. Darth Vader is what John Boehner calls me.”

He finished on the same theme. “And in the words of one of my favorite Star Trek characters â€“ Captain James T Kirk of the USS Enterprise â€“ ‘May the force be with you’.”