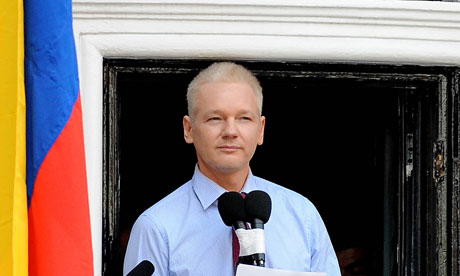 Britain has assured Ecuador that Julian Assange has a double guarantee that he cannot face extradition from Sweden to the US if he were to face the death penalty or his human rights were to be breached.

In a written statement to MPs, the foreign secretary, William Hague, said it was a “matter of regret” that the government of Ecuador had decided to offer asylum to Assange after Britain offered a series of assurances to Quito.

Britain is seeking to extradite Assange to Sweden, where he faces allegations of sexual misconduct. The WikiLeaks founder, who sought protection in the Ecuadorean embassy in London in June, has been granted asylum by Quito on the grounds that he could face extradition from Sweden to the US where, it is feared, he could face the death penalty for his role in publishing hundreds of thousands of leaked US government documents.

Hague told MPs the double guarantee meant Assange could only be extradited to the US from Sweden if both Britain and Sweden believed he would not face the death penalty and his human rights would not be breached.

The foreign secretary said: “Both the United Kingdom and Sweden are signatories to the European convention on human rights and the British government has complete confidence in the independence and fairness of the Swedish judicial system. As we have discussed with the government of Ecuador, the United Kingdom and Sweden robustly implement and adhere to the highest standards of human rights protection.

“The suggestion that Mr Assange’s human rights would be put at risk by the possibility of onward extradition from Sweden to a third country is also without foundation. Not only would Sweden â€“ as a signatory to the European convention on human rights â€“ be required to refuse extradition in circumstances which would breach his human rights, but the authorities in Sweden would also be legally obliged to seek the United Kingdom’s consent before any extradition to a non-EU member state could proceed.

“Our consent may only be given in accordance with the international conventions by which the UK is bound, including the European convention on human rights, and also our domestic law. In practice, this means that the United Kingdom could only consent to Mr Assange’s onward extradition from Sweden to a third country if satisfied that extradition would be compatible with his human rights, and that there was no prospect of a death sentence being imposed or carried out.”

The foreign secretary expressed disappointment that Ecuador decided to grant asylum to Assange after officials had explained the guarantees to Quito in detail.

“It is a matter of regret that instead of continuing our discussions, the foreign minister of Ecuador announced on 16 August that Ecuador had decided to grant diplomatic asylum to Mr AssangeÂ â€¦ We wish to continue our dialogue with the government of Ecuador. We believe that our two countries should be able to find a diplomatic solution. We have invited the government of Ecuador to resume, as early as possible, the discussions we have held on this matter to date.”

In his statement, Hague did not repeat his warning to Ecuador last month that Britain could invoke the Diplomatic and Consular Premises Act 1987 to arrest Assange inside the embassy.

Hague simply told MPs: “Throughout our exchanges, we have noted that the rights of diplomatic missions conferred by the 1961 Vienna convention on diplomatic relations come with responsibilities. Article 41 of the Vienna convention sets out the obligations of diplomatic missions to respect the laws and regulations of the receiving state â€“ in this case the United Kingdom. These include the duty not to impede the due legal process of that state.”