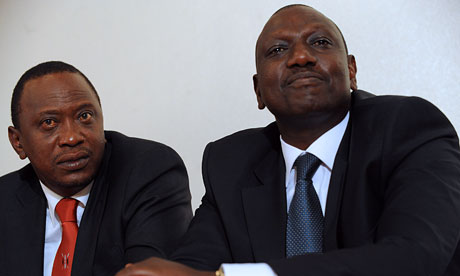 Uhuru Kenyatta and deputy named in report that condemns his family, predecessors and state agencies over human rights

Kenya‘s president has received a long-awaited report that names him and his deputy as being among those suspected of planning and financing the country’s 2007-08 post-election violence, in which more than 1,000 people died.

Uhuru Kenyatta and William Ruto already face trial at the international criminal court (ICC) for crimes against humanity on charges related to the election violence, in which 600,000 were evicted from their homes, but local attempts to prosecute the two have never taken off.

The Truth Justice and Reconciliation Commission report did not recommend prosecution for the two, as they already faced the action at the ICC.

Kenyatta’s family members â€“ especially his father, the founding president, Jomo Kenyatta â€“ are named in the report as having presided over a government responsible for numerous human rights violations and illegal allocation of land.

The government-funded report, which was years in the making, finds that Kenya’s second and third presidents, Daniel Arap Moi and Mwai Kibaki, headed governments that were responsible for massacres, economic crimes and grand corruption, among other violations.

Kenya’s state security agencies, particularly the police and army, have been the main perpetrators of human rights violations including massacres, enforced disappearances, torture and sexual violence, the report says.

The commission said that during the period it was mandated to investigate, from 12 December 1963 to February 2008, the state adopted economic and other policies that resulted in the economic marginalisation of five key regions in the country.

Women, girls and minority groups have been the subject of state-sanctioned, systematic discrimination in all spheres of their life, according to the commission; and despite the special status accorded to children in Kenyan society, they have been subjected to atrocities including killings, physical assault and sexual violence.

The report recommended that parliament set up a legal infrastructure to help victims of historical injustices get reparations, including financial compensation, public apologies and commemoration.

The Truth, Justice and Reconciliation Commission was formed from a wider effort to establish the truth behind historical violations that are partly blamed for the 2007-08 violence. That was sparked by a dispute over who had won the December 2007 presidential election.

A 2008 government commission found historical injustices such as unequal land distribution partly responsible for the violence. The new report reinforced those findings, saying historical grievances over land are the single most important driver of conflicts and ethnic tension in Kenya.

The issue of land in Kenya remains divisive. Commissioners were split about changes made in the land chapter of the report before it was presented to the president.

Kenyan media reported that the commission had been under pressure from powerful individuals in and out of government to edit out sections of the report implicating certain people in illegal land allocations.

The report said between 1964 and 1966 one-sixth of European settlers’ land that had been intended for settlement of landless and land-scarce Kenyans had been sold cheaply to Jomo Kenyatta and his wife, Ngina, his children and others. Jomo Kenyatta himself appears to have benefited immensely from irregular allocations of land that should have gone to those who had lost land to Arab and British colonisers, the report said.

“President Kenyatta’s direct engagement in irregular land allocations compromised his position to prevent or remedy similar cases of land-grabbing by his close associates,” the report said.

In 2011, Forbes magazine listed Uhuru Kenyatta, 51, as the wealthiest Kenyan, worth at least $500m (Â£332m), although he was dropped from a later list because his personal wealth was hard to separate from his family’s wealth.

The report said the elder Kenyatta, who held office from 1963 to 1978, had run a government that failed to remove the repressive state structures established by the British colonial government, and which used those laws to perpetrate human rights violations.

Human rights had been further violated by the creation of the one-party state by the Moi administration, resulting in severe repression of political dissent, intimidation and control of the media, it said. The commission report also blamed the media for allowing violations to occur with little public scrutiny.

Kibaki is accused of presiding over a regime that oversaw killings.

Kenyatta, who received the report late on Tuesday, said the government would take the recommendations seriously. He said addressing the causes and effects of past injustices would contribute to national unity, reconciliation and healing, and would enable Kenyans to move forward with a renewed sense of nationhood.

The commission, formed in August 2009, was supposed to have taken two years to complete its work. It said that, despite challenges, it had managed to collect more than 40,000 statements, more than any other truth commission in the world.