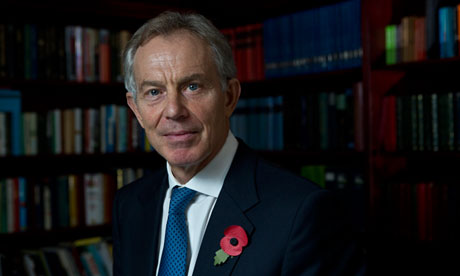 Tony Blair will make an impassioned intervention in the debate over Britain’s future in Europe, warning that any disengagement from the European Union‘s “top table” would be a disaster for the UK’s economy and its power on the world stage.

With more senior Tories backing moves that could see the UK leaving the EU mainstream, Blair will seek to rally the business community behind a campaign to halt the Eurosceptic bandwagon before it is too late.

At a speech in London on Wednesday, Blair will say that with major economies such as China, India, Brazil and Russia emerging as formidable competitors in the global economic power game, EU membership has never been more important. A source close to the former prime minister said: “Whereas the postwar argument for Europe was about peace versus war, he will make the point that the 21st-century case for Europe is about power versus irrelevance.”

In Wednesday’s speech, to the Business for New Europe coalition of business leaders pushing for reform in Europe, Blair will argue that the EU needs to promote a “grand plan” about its purpose, driving home the message that member states can best take on these huge economic powers as a united bloc. He will highlight statistics showing that 47% of UK exports go to EU member states while 50% of foreign direct investment is from EU countries.

Blair’s move, ahead of a keynote speech on Europe by David Cameron expected next month, is likely to be seen as evidence that having failed in 2009 to become the first permanent president of the EU council he still hankers after a prominent role in European politics. Friends of Blair say he believes that the EU still lacks effective leadership and too often fails to promote a “big vision”. Instead it too often gives the impression that it is obsessed with arcane, if important, institutional reform. Referring to moves to reform Europe’s institutions to end the euro crisis, a source said: “He will say that of course you have to get the politics and economics aligned but this has to be part of a grand plan not a series of incremental changes.”

News of his intervention, following the breakdown on Friday of an EU budget summit at which Cameron, with support from Germany, Sweden and the Netherlands, refused to agree a new seven-year budget for the bloc, comes as business leaders expressed growing unease about the Conservatives’ anti-EU stance and the growing hostility to Europe among voters.

Last week the CBI president, Sir Roger Carr, said UK membership of the EU was the “launchpad” for much international business. “Whatever the popular appeal may be of withdrawal, businessmen and politicians must keep a bridge to Europe firmly in place,” he said.

Senior figures close to Ed Miliband believe that Labour â€“ with Blair potentially playing a key role â€“ can form a powerful alliance with business to argue the pro-EU case both in the runup to the next general election and during any future referendum on Europe.

While European leaders refused to criticise Cameron for his tough line on the budget, some said that Britain’s influence would begin to wane in key negotiations if it made clear its aim was to disengage.

Guy Verhofstadt, the former Belgian prime minister who now leads the Liberal group in the European parliament, said: “There is a feeling that there is a hidden agenda [for the UK], a feeling that they want second-class membership. It is weakening its position around the negotiating table.”

While EU leaders had shown respect for Cameron over his demands for spending cuts, sources said that patience would not last if the UK continued to stand in the way of future reforms of the EU and eurozone. European leaders are now anxiously waiting to see how the UK reacts to proposals for an EU banking union to be considered at the next summit on 13 and 14 December. “People have to realise that the train is not stopping. It is going forward,” said Verhofstadt.

A senior Brussels official said: “We always hear that the UK has special demands but never that Europe has special needs.”

Tory chairman Grant Shapps became the latest high-ranking Tory to entertain the idea of the UK leaving the EU when he said that the prime minister should not be afraid to use a threat to quit as a way to force other member states to allow repatriation of powers to Britain.

Tory Eurosceptics praised Cameron’s performance in Brussels but warned that the battle was only just beginning. Bernard Jenkin, chairman of the public administration select committee and a leading Eurosceptic, said that the breakdown of the summit showed “how dysfunctional the EU has become and underlines the fact that there needs to be a new relationship for those who do not want to be part of the federal eurozone”.

Jenkin said that he and other Eurosceptics would now back calls for there to be a “mandate referendum” before the next general election to find out what sort of relationship the British people wanted to have with the EU.

Cameron will make a statement on the outcome of the Brussels budget summit in the House of Commons on Monday.