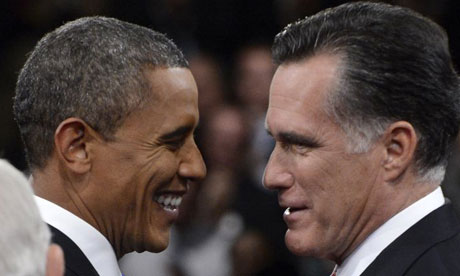 Barack Obama went on the offensive over foreign policy in the third and final presidential debate, repeatedly accusing Mitt Romney of flip-flopping on major international issues but failing to deliver a killer blow to his opponent’s resurgent campaign.

While the president emerged as the narrow winner on the night, the encounter, which was cordial and largely uneventful compared with the previous two debates, is unlikely to have much impact on the outcome of the election.

Going into the debate at Lynn University in Boca Raton, Florida, Obama had an in-built advantage on foreign policy and security. Â As president, with access to daily briefings by intelligence analysts, diplomats and generals, he is better briefed and it showed as he dominated Romney in the first half of the debate.

The Republican candidate appeared unsure at times and occasionally stumbled over his lines as if struggling to remember his briefing notes. He began sweating as Obama, aggressive from the start, got the better of him during exchanges on Iran, Iraq and Russia as well as on US military spending.

ObamaÂ described his opponent twice as “wrong and reckless” and accused him of being “all over the map” on his foreign policy positions. The president worked through a list of issues on which he said Romney had been wrong, from support for the 2003 Iraq invasion through to opposing setting a timetable for withdrawal from Afghanistan.

“What we need to do with respect to the Middle East is strong, steady leadership, not wrong and reckless leadership that is all over the map,” said Obama. “And unfortunately that’s the kind of opinions that you’ve offered throughout this campaign, and it is not a recipe for American strength, or keeping America safe over the long haul.”

But with a growing sense in the Republican camp that the White House might just be within reach after all, Romney appeared happy to settle for a safe, gaffe-free performance in which his main goal was to reassure the US public that he was not a warmonger.

On issue after issue, from Iranian sanctions to withdrawal from Afghanistan, there was little difference between his position and that of the administration, but Romney insisted that he would have projected American strength more effectively. “Nowhere in the world is our influence greater than it was four years ago,” said Romney.

But while the debate was supposed to be solely about foreign policy, domestic concerns were never far from the surface and the candidates took every opportunity to pivot to their stump speech attacks over the economy and tax. The same was true in the spin room afterwards where both campaign teams dispensed quickly with debate comments and moved instead to analysis of the state of the race in swing states.

One of the most telling moments came when Obama, in a flash of normally suppressed arrogance, lectured Romney on military developments as if he was a child. Responding to a pledge by Romney to increase military spending and a complaint that the navy had fewer ships, Obama resorted to heavy sarcasm.

“You mentioned the navy, for example, and that we have fewer ships than we did in 1917. Well, governor, we also have fewer horses and bayonets, because the nature of our military’s changed. We have these things called aircraft carriers, where planes land on them. We have these ships that go underwater, nuclear submarines,” Obama said.

But Romney did not crumple and recovered in the second half, in particular when he managed to drag the debate on to domestic economic concerns.

On the Middle East he said an attack on Iran would be a last resort and that he was against direct US military involvement in Syria. He sought to neutralise the advantage Obama enjoys thanks to the killing of Osama bin Laden by insisting that his own policy was about more than “going after the bad guys”.Â  “We can’t just kill our way out of this mess,” Romney said.

Romney managed to get in some hits on Obama too, accusing him of having conducted “an apology tour” of the Middle East at the start of his presidency and this was perceived by America’s enemies as a sign of weakness. “Mr President, America has not dictated to other nations. We have freed other nations from dictators,” Romney said.

The idea that Obama is an apologist for American values resonates strongly among conservatives.

Obama responded by describing the “apology tour” as “probably the biggest whopper that’s been told during the course of this campaign”.

“If we’re going to talk about trips that we’ve taken,” Obama said, in a reference to Romney’s widely criticised summer tour of Britain, Poland and Israel, “when I was a candidate for office, first trip I took was to visit our troops. And when I went to Israel as a candidate, I didn’t take donors. I didn’t attend fundraisers … I went to … the Holocaust museum there to remind myself of the nature of evil and why our bond with Israel will be unbreakable.”

The instant polls agreed that Obama carried the night. Public Policy Polling published a poll showing Obama won the debate 53% to 42%. A CNN poll gave it to Obama by 48% to 40%.

But few believe that the clash will have done much to affect the course of the race, which enters its final two weeks with Romney still enjoying a surge that began after his triumph over a listless Obama in the first debate in Denver on 3 October.

Obama won the second to put himself back in the race. Â Although he also won the third, foreign policy is not a major concern for voters and it is unlikely to result in any major poll swings.

TheÂ exchanges revealed there is little major difference between the two in term of their approach to security and foreign affairs. On Iran both vowed it will not be allowed to have nuclear weapons.Â Rommey said he would introduce more stringent sanctions; Obama said they were already as stringent as they could possibly be.

Suprisingly there was almost nothing on the Benghazi consulate attack. Having twice botched the issue Romney opted against returning to it in depth.

Obama teased Romney over his claim that Russia rather than al-Qaida was America’s number one foe. Â Romney said he had meant Russia was America’s biggest geopolitical foe and al-Qaida its biggest security problem.

Both agreed that in Syria President Bashar Assad will not survive. Obama said there was no difference between the two on policy towards Syria except that Romney wanted to send heavy weapons to the rebels.

Romney said America should be arming the “responsible” rebels. “Syria is an opportunity for us,” Romney said. “Syria is Iran’s only ally in the Arab world … so seeing Syria remove Assad is a very high priority for us … We should have taken a leading role.”

The two jostled over who was the closest to Israel, with Romney berating Obama for failing to visit Israel during a Middle East tour.

Stuart Stevens, one of Romney’s chief advisers, said: “The more people see Governor Romney the more comfortable they are with him.”

He criticised Obama for the sarcasm he displayed over the smaller navy. “I do not think his tone and demeanour is something that people would find attractive,” Stevens said.

David Plouffe, one of Obama’s chief advisers, said: “The president was strong. Romney was unsteady.”