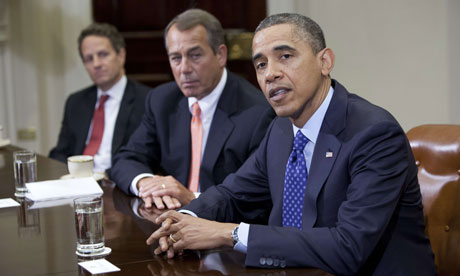 Is America really heading off a cliff? Why can’t Congress and the president strike a deal? Get the lowdown with our handy primer

So let’s start at the beginning: what is the fiscal cliff?

It’s not one cliff, but two things: a group of spending cuts and tax hikes that will come into effect on January 2.

So we have to cut $1.3tn from the federal budget all at once?

That’s a lot of money. But 10 years doesn’t seem particularly cliff-like, and yet everyone calls this the fiscal cliff. Why’s that?

Because the cuts this year are going to be particularly sudden, and particularly hard to take while the US is in recession. Remember, spending gooses the economy. When we stop spending, the economy usually slows down. The problem is, the US economy is already so fragile â€“ growing less than 2% a year â€“ that dragging it back even further would result in a recession.

Why are the cuts this year so sudden and hard to take?

The debt-ceiling fight got so ugly, and both sides were so opposed, that the US came within hours of being unable to pay its debts. So politicians struck an agreement: the debt ceiling would be raised â€“ but by January 2 2013, Congress would also have to come up with a plan to trim the national deficit. If they didn’t, there would be automatic spending cuts and tax hikes.

Is that why it’s called the fiscal cliff? Because at the start of next year we’re going to fall and die?

Not quite. It’s called the fiscal cliff because it’s a catchy term.

Catchy? The word fiscal is like a sleeping pill.

True, but it’s catchier than “a blend of sequestration and tax hikes”.

For the actual fiscal cliff term, blame our chief wonk, Federal Reserve chairman Ben Bernanke. He popularized it while testifying in front of Congress in February.

So what does the fiscal cliff look like, exactly? And what kind of spending will we be cutting?

The cuts will take $109bn from the federal budget every year for the next 10 years. Half, or $54.7bn, are to defense spending, and the other half are to government programs, like Medicare. Medicare will pay doctors 30% less.

Medicare will lose about $11bn. The other cuts will hit student loan fees and various government offices, from Fema to the Department of Agriculture.

A lot of people are also worried that federal unemployment benefits won’t be extended. The benefits of the long-term unemployed are under threat particularly, and 2 million people could lose out.

Wow. How about the tax hikes?

Over the past 12 years, there have been a lot of tax cuts. But those tax cuts will lapse on January 2.

The biggest set of tax cuts to expire are the Bush-era ones, which were put in place in 2001 to boost the economy. They’ve been popular with Republicans and Democrats, so you’ve been paying low taxes for more than a decade, probably without even noticing it.

Once these Bush tax cuts disappear, the top tax rate will rise to 39.6% from 35%. Social Security taxes will also go up to 6.2% from their current rate of 4.2%, and a small tax will be imposed on high earners to pay for the new Affordable Care Act.

Also, the Alternative Minimum Tax, or AMT, will run out at the end of the year. The AMT is a flat tax, usually for people who earn a lot of money. Right now, it applies to about 4 million people. If we go off the fiscal cliff, it will apply to 32 million people, which means a lot of people who consider themselves middle-class will have to pay taxes as if they are rich. It is extremely likely that Congress will “patch” the AMT, though, even if it does nothing else for the next 46 days.

You said my tax bill will be bigger if we go over the fiscal cliff. How much bigger?

It depends on your income bracket. It could be as much as $3,500 per household. The Tax Policy Center estimates that the tax bills for middle-class households will increase by $2,000.

Well, there are two schools of thought on this.

The first school says that nothing will happen â€“ that Congress will not allow us to go over the edge, that they’ll come up with some sort of temporary solution, and that we’ll revisit the whole mess in six months.

But some say Armageddon will draw near around say, December 20, as the deadline draws closer and Congress still has nothing to show for its efforts.

That Armageddon is a psychological effect that will create a financial one. Investors will start panicking in the stock markets, which could start falling sharply. Then the business community will panic, because they won’t know what their taxes will be for the next year.

As we draw closer to the fiscal cliff deadline, those panicked CEOs could stop spending and hiring. That, in turn, would hurt the chances of seeing the unemployment rate fall. It also could destroy the tentative recovery. In fact, some claim it could increase the jobless rate to 9% from the current rate of 7.9%; because the US economy is growing so slowly, any stall in that growth could send us back into recession.

All of that would not happen immediately; it takes a few months for growth to slow down, and unemployment likely won’t rise right now. But, many people say: why chance it?

So what are Congress and the president doing for the next month?

They’re “in talks”; which seems to involve arguing â€“Â and doughnuts.

Ugh. What do they agree and disagree about?

Everyone agrees that the Bush tax cuts should be extended for the middle class, so that middle-class households can keep their low tax bills.

But they disagree is over extending the Bush-era tax cuts for households that are “rich”; ie the ones making more than $250,000 a year.

The president is adamant that those high-earners will have to pay higher taxes. But John Boehner and his team of Republicans are dead against it.

But won’t they just postpone it again?

Yes, most likely. It’s hard to imagine they’ll come up with a solution to the US tax code in the next six weeks.

So no one ever tried to fix this deficit problem before?

Oh, they did. In 2010, Erskine Bowles and Alan Simpson created a bipartisan plan, known, catchily, as “Bowles-Simpson” and “Simpson-Bowles”. The duo â€“ “two old coots”, in Bowles’ own quip this week â€“ are the elder statesmen of federal budget battles. Bowles helped balance the federal budget in 1996. It’s never been balanced again since.

The Bowles-Simpson plan included tax hikes and spending cuts. It proposed to cut the federal workforce by 10%, close down a third of US military bases in foreign countries, introduce a 15Â¢-a-gallon gas tax and eliminate the mortgage interest rate deduction for homeowners. It also called for raising the retirement age for social security; cutting government pensions, subsidies for farmers and student loans. The president ended up lukewarm on the plan, though, and it has never taken off and probably won’t.

There’s also the Domenici-Rivlin plan, which looked to replace the current tax code it with two income-tax rates: one for 15% and one for 28%. It would also lower the top tax rate for big companies down to 28% and treat capital gains and dividends as ordinary income, instead of a special category of their own.

Also, Mitt Romney suggested capping income-tax deductions â€“ either at $17,000, $25,000 or $50,000, according to his various speeches. This would effectively raise taxes on the rich without actually changing tax rates.

However, it might also hit charities, since they get a lot of money from wealthy donors who benefit from the tax breaks on philanthropy.