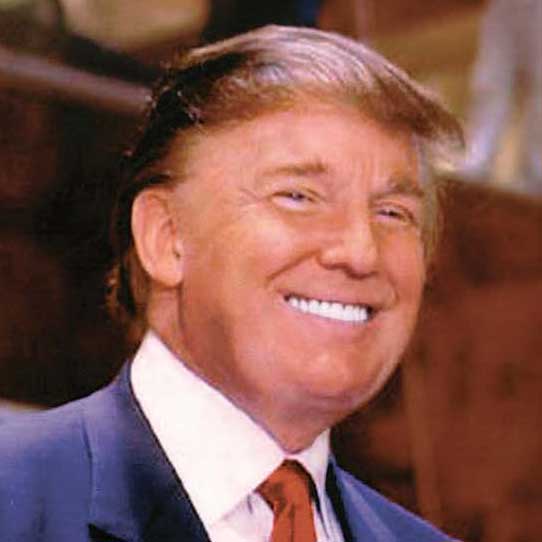 Billionaire finally launches his ‘devastating’ bombshell; Romnesia and the Obamastare; and Lindsay Lohan is the undecided

â€¢ Possibly the least credible statement in the election campaign so far â€“ and that’s an extremely crowded field â€“ appeared on the Facebook page of angry multimillionaire and windfarm-hating germophobe Donald Trump, in advance of what he promised would be a gamechanging “October Surprise” revelation about Barack Obama. “This is not a media event or about Donald J Trump,” he wrote â€“ a claim that, if true, would have made it unique in his professional career. “This is about the United States of America.” Oh, but it very much was about Donald J Trump â€“ and far from being a gamechanging revelation, the much reported revelation, when it finally came, wasn’t even a revelation. It was a two-and-three-quarter-minute YouTube videoin which the mogul, sitting behind a desk and seemingly channelling the spirit of a Bond villain, offered Obama “a deal I don’t believe he can refuse.”

It was this: “If Obama opens up and gives his college records and applications, and if he gives his passport applications and record, I will give to a charity of his choice â€¦ a cheque, immediately, for $5m (Â£3.1m).” And so the political media slunk away, feeling soiled that they’d let Trump manipulate them so easily, and swearing not to be so gullible again. After all, they’d already fallen for an earlier alleged “October Surprise”, when a website with the address Octsurprise.com appeared online, displaying a countdown clock and promising a devastating scoop, only to fizzle out in a lame joke. They weren’t about to let that happen a third time. Besides, there was an important story to cover: the celebrity feminist lawyer Gloria Allred, Trump’s opposite in almost every sense except in her enthusiasm for self promotion, announced that she’d soon be revealing material damaging to Mitt Romney. It was rumoured to concern testimony he’d given in the 1990s divorce case between the founder of Staples, in which Romney’s Bain Capital had invested, and his wife. Could this be the long awaited October Surprise? It’s about time we had one of them.

â€¢ Whatever the so-called experts may claim, everyone knows that American presidential elections are won or lost on the strength of each side’s bad puns. Judging by the frequency with which it’s deployed, the Obama campaign’s “Romnesia” gag must be working wonders. By contrast, the efforts by some Romney supporters to describe the president’s facial expression during Monday night’s debate as the “Obamastare” don’t seem to be catching on. So Republicans should be thankful for a coinage by the conservative commentator Michelle Malkin, “hate couture“, which refers to the scandalous fact that people in the fashion industry tend to vote Democratic, and that Diane von Furstenberg made a joke at a recent event about how Republicans weren’t allowed.

Fox News has a more elaborate conspiracy theory: “Is [Vogue editor] Anna Wintour pressuring designers to steer clear of Ann Romney?” Wintour is a generous Obama backer, but the evidence is pretty thin, consisting primarily of the fact that Von Furstenberg’s team haven’t responded enthusiastically to Romney wearing their designs. If Fox has it right, though, these could be dangerous times for Isaac Mizrahi, who brazenly defied Wintour by telling an interviewer: “I would love to see Ann Romney in more of my clothes.” If he’s never heard from again, we’ll know why.

â€¢ Who are the mysterious undecided voters on whom the outcome of this election, and possibly the fate of the planet, now rests? Well, one of them seems to be the drama-prone actor Lindsay Lohan. She previously claimed to be supporting Romney, then, during Monday’s debate, retweeted a pro-Obama message. Then she deleted it. Then she tweeted congratulations to both candidates for their “nice work”, and suggested that the “severe anxiety” she’d been feeling during their encounter might have exceeded their own. Not that it’ll matter: according to investigations by the website E! Online, she’s probably not registered to vote.