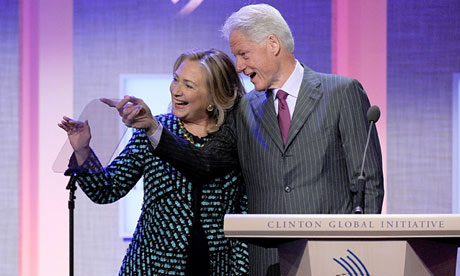 With Bill lauded even by his political opponents and Hillary enjoying success as secretary of state, there’s a new groundswell among Democrats to secure the succession and back a Clinton run for the White House in 2016

The bitter and negative 2012 US presidential election has left few political reputations intact. Republican challenger Mitt Romney has run a staggering, gaffe-prone campaign, while President Barack Obama is battling a listless economy and a disenchanted Democratic base.

But, through all the attacks ads, missteps and heated controversies, both Bill and Hillary Clinton have emerged with their reputations and status not only intact but greatly enhanced. In a remarkable development, and 12 years since they vacated the White House, the Clintons have rarely seemed more influential or more relevant.

Rather than slipping away into obscurity, Bill Clinton is hitting the campaign trail hard for Obama after his stirring performance at the Democratic convention in Charlotte, North Carolina, overshadowed the president. Meanwhile, secretary of state Hillary Clinton is trotting the globe as America’s top diplomat amid feverish speculation that, whichever of Obama or Romney wins on Tuesday 6 November, she will again run for the White House in 2016. That could make her the first female US president and conceivably extend Clintonian domination of US politics to 2024.

“How many couples do we know of in American politics, or any politics, that are so manifestly talented, accomplished, persistent, persuasive and so evenly matched?” asked William Galston, a former top adviser to Bill Clinton and now a fellow at the Brookings Institution in Washington. “One has already been president and the other nearly was and may still be.”

Bill Clinton is an unexpectedly visible figure on the 2012 campaign trail, hitting key swing states such as New Hampshire. He holds pro-Obama rallies and puts his name to fundraising emails. His speech in Charlotte won plaudits from both sides of the political aisle. Indeed, when Romney later came to speak at an event in New York hosted by Clinton’s charity, the Republican candidate joked about the former president’s seemingly magic touch. “If there’s one thing we’ve learned in this election season, by the way, it is that a few words from Bill Clinton can do a man a lot of good,” he said.

Experts believe much of the goodwill now exhibited towards Clinton reflects a perception that his 1990s presidency was largely free from the wars and economic crises that have gripped America over the past decade. “We think of it as a time of peace and prosperity. We don’t think Obama measures up. We know Romney does not measure up. So we want what we don’t now have,” said Larry Haas, a political expert and former aide in the Clinton White House.

There is also the fact that the former president remains one of the most gifted speakers in the world whose appetite for attention and publicity is entirely undiminished since his heyday and is in stark contrast to other former presidents, such as George W Bush.

“He is the most persuasive man on the planet,” said Galston. Or, to put it another way, “he just cannot help himself. He has never been shy of upstaging the person he is supposed to be supporting,” commented Professor Andrew Smith, a political scientist at the University of New Hampshire.

Of course, when it comes to Bill Clinton the bad also comes along with the good. Amid all the plaudits have emerged reports that Monica Lewinsky, the White House intern whose tryst with Clinton became a decade-defining sex scandal, is planning to write a tell-all book. If it does emerge, it will no doubt see a rehash of all the seedy low points of Clinton’s presidency. But few expect it to have any real impact. The Lewinsky affair is old news and â€“ as he does not have an elected office â€“ Clinton is immune to the effect of such scandals.

So far the political career of his wife has been scandal-free. As secretary of state, Hillary Clinton has carved out a reputation as a tough operator whose term of office has been a resounding success. Indeed, after being narrowly beaten by Obama for the 2008 nomination, many now see her as a natural runner for 2016. Clinton herself, who is standing down from her diplomatic job in 2013, has said she has no such plans. But the firm denials have done nothing to dampen down the speculation and most experts see a huge opportunity for her. “Clinton has done best by staying out of the way of the 2012 race. If you are not getting down in the mud with everyone else, then you stay clean,” said Smith.

Though Clinton would be 68 by 2016 few people see her age as a real block to her ambitions. Instead, they see a powerful candidate, hugely popular with the crucial demographic of women voters, who might be able to take advantage of a Democratic base suffering from “buyer’s remorse” when it comes to the high initial hopes for the Obama presidency.

Her campaign organisation from 2008 would also be relatively easy to revitalise, giving her a huge advantage in fund-raising and on-the-ground activists.

“The folks I know who worked for her in New Hampshire have kept the organisation together. She could go pretty quickly and hit the ground running,” said Smith.

Of course, the key question is: does Clinton want to run again? No one knows the answer, including probably Clinton herself.

“I bet she hasn’t figured it out yet,” said Haas. But what seems certain is that the moment for a decision will come some time in 2014. If she says yes, then not only will America be once again facing up to the idea of a historic Hillary Clinton presidency but Bill will be right there alongside her. For if the country has learned one thing about the Clintons, it is that â€“ despite their many differences and difficulties â€“ they seem to come as a pair. “The last chapter of this saga has not been written yet,” said Galston.

Bill Clinton is elected attorney general of Arkansas, two years after being defeated in a race for a Congress seat. Hillary Clinton is a leading lawyer and children’s rights advocate who had worked for President Jimmy Carter.

Bill Clinton becomes governor of Arkansas and Hillary the state’s first lady, but her law career goes from strength to strength (she earns more than her husband until they get to the White House).

Bill Clinton runs for the White House. Though seen as an outside bet and with a campaign rocked by a sex scandal, he eventually wins the Democratic nomination and â€“ in a shock result â€“ ultimately defeats President George HW Bush. A task force headed by Hillary Clinton attempts â€“ but fails â€“ to reform healthcare. Their first term is also marred by the so-called Whitewater scandal over an Arkansas land deal.

Bill Clinton wins a second term, easily beating Republican challenger Bob Dole. But the second term is hit by the Monica Lewinsky scandal and a long attempt by Republicans to impeach the president.

With Bill Clinton heading off to an “elder statesman” role, Hillary Clinton moves to the forefront. She runs for Senate in New York, becoming the only first lady to run for elected office. She easily wins, going on to secure re-election in 2006. Bill Clinton runs his global development charity.

Hillary Clinton enters the White House race as a favourite to win the Democratic nomination. But Barack Obama’s upstart campaign eventually triumphs. Clinton is then appointed secretary of state and becomes the world’s top diplomat. She successfully stays out of party politics, displays loyalty to Obama and wins plaudits for her role from both parties.