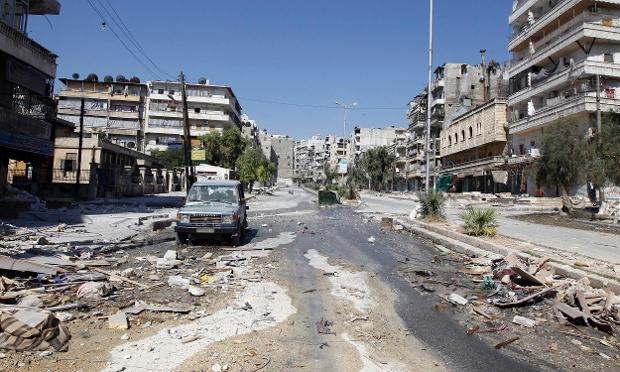 This article titled “Syrian rebels fight on for Aleppo despite local wariness” was written by Martin Chulov in Aleppo, for guardian.co.uk on Tuesday 21st August 2012 17.53 UTC

More than a month into the battle for Aleppo, the rebels who seized control of much of the city sense that its residents do not yet fully support them. Opposition fighters â€“ around 3,000 of them â€“ are almost the only people moving around the eastern half that the Free Syrian Army now controls. The small numbers of non-fighters who remain seem to pay them little heed. Few seem openly welcoming.

“Yes it’s true,” said Sheikh Tawfik Abu Sleiman, a rebel commander sitting on the ground floor of his fourth new headquarters â€“ the other three were bombed. “Around 70% of Aleppo city is with the regime. It has always been that way. The countryside is with us and the city is with them. We are saying that we will only be here as long as it takes to get the job done, to get rid of the Assads. After that, we will leave and they can build the city that they want.”

As the sun set on the first day of Eid al-Fitr marking the end of Ramadan on Sunday, Sheikh Abu Sleiman visited a mosque in the north of the city and took up the microphone. “I told them that we understand their suffering,” he said. “We are sensitive to their needs and we know that this has been a major disruption. And that when we finish, Aleppo is theirs.” The sheikh’s words echoed from a minaret in a rebel-held district across residential streets long since deserted.

One of the two most festive occasions in the Islamic calendar is usually a time of neighbourly visits, new toys for children and streetside frivolity. But this year Eid bypassed Aleppo.Almost every shop in the east of the city remained shuttered. There were more scraps of windblown rubbish moving on main roads than there were cars. The crackle of celebratory fireworks was replaced by a relentless soundtrack of gunfire and bomb blasts.

What those who have stayed behind now think of the war raging around them remains difficult to gauge. Since Sunday most residents still in frontline areas have seemed to be leaving. None wanted to talk.

Some residents gave the newcomers bottles of water and food. Exchanges between rebels and residents were low-key and civil. “Be careful down that way, uncle,” a 23-year-old rebel from the nearby town of al-Bab told an elderly man. “See that plane, it has been bombing 300 metres ahead.”

The man craned his neck as a fighter jet began its attack, plunging low enough for its markings to be clear against a vivid blue sky as its two rockets crashed into a building. A heavy machine gun on a crossroads thundered as the jet passed overhead.

Not far away, families clutching black plastic bags of belongings walked silently down the hill from the suburb of Saif al-Dowli. Tanks shells crashed into buildings not far behind them. The war’s newest refugees passed several pharmacies and corner stores that had been looted but not ransacked. “We take what we need,” said one rebel commander. “But nothing more.”

Another old man walked slowly up the hill and across an intersection towards one of two impromptu rebel outposts. A helicopter hovered menacingly above and chunks of masonry from a nearby explosion made his going difficult. “Where are you going, Haj [respected elder],” one rebel asked him. “I want to go to the mosque,” he replied.

“The mosque?,” the rebel said, pointing to a no-man’s land further up the hill. “It’s very dangerous. You will have to go back to your house.” The rebel called for a cup of water to give to the man, who seemed confused and tired. Other fighters eased his heavy frame into a plastic chair. “Who is better, the regime army or the Free Syrian Army,” one asked him. He waved his arms and said: “I swear I don’t know. You are all my sons.”

The old man wandered slowly back down the road, oblivious as mayhem erupted around him. A unit had seen a helicopter approaching from the east and had opened fire with another machine gun. The helicopter flew away unharmed, just like the jet minutes earlier. “We really need someone who can shoot these things,” said a rebel commander, Jaafar Furad.

Winning the skirmishes overhead could prove decisive in the battle for Aleppo. For now though, the outgunned rebels in the city’s south-west are trying to claw back gains on another front. The suburb of Salahedin, their stronghold until air strikes forced them to withdraw, remains the most bitterly contested corner of the Syrian uprising.

Early on Monday a Japanese reporter, Mika Yamamoto, 45, from the Japan Press news agency, was killed during a clash in the area between regime gunmen and the rebel group she was with. Regime forces have entered the neighbourhood and are probing into adjoining districts. The street fighting is intense, sometimes room to room, the two sides separated only by walls. “We can hear them and sometimes we insult each other,” said Mohammed Jou, a carpenter turned rebel from the Aleppo countryside.

Barely a soul moves on the frontline. Rebels tiptoe over broken glass and tread carefully through lounge rooms and hallways as they try to reach fighting positions. Some use sledgehammers to knock holes through house walls for rat runs to avoid snipers.

Syrian rebels are not alone in using these routes to the frontline. In recent days another group of fighters has arrived, jihadists from other parts of the Islamic world. The Guardian saw four such fighters â€“ a Saudi, a Pakistani, an Algerian and a Senegalese man â€“ waiting at a staging point not far from Saif al-Dowli on Monday. Others, perhaps as many as 30, have entered Salahedin. “Are you a Muslim?” the Senegalese fighter asked in response to a greeting.

“They’re not planning on coming out,” said Moustafa Kamal, a volunteer from al-Bab. Asked about the presence of foreign fighters, a long-predicted and often feared dynamic in Syria’s civil war, Kamal said: “I welcome them. They are very brave and they are very good fighters. They are not scared of anyone.”

Other rebels were more circumspect. “They’re a very big problem,” said Sheikh Abu Marwan Osman, in al-Bab. “They don’t understand Islam and they will make things more difficult for all of us.”

“We have enough challenges already,” said a rebel commander in the north of the city. “These people will give us all a headache. We need to prove to the people that this revolution will work.”