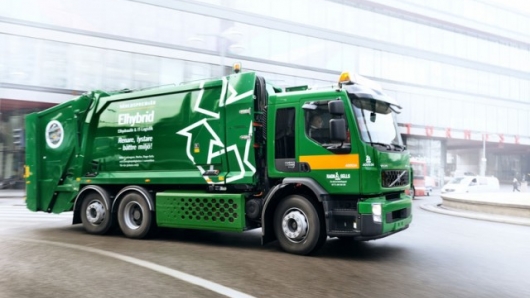 “NPR reports that Sweden’s program of generating energy from garbage is wildly successful, but recently its success has also generated a surprising issue: There is simply not enough trash.

Sweden has recently begun to import about eight hundred thousand tons of trash from the rest of Europe per year to use in its power plants. Sweden already brings trash from Norway and hopes to get garbage from Italy, Romania, Bulgaria and the Baltic countries.

Sweden creates energy for around 250,000 homes and powers one-fifth of the district heating system. Its incineration plants offer a look into the future where countries could potentially make money off of their trash instead of dumping. Landfilling of organic materials â€“ a highly inefficient and environmentally degrading system (PDF) â€” has been forbidden in Sweden since 2005 and emissions of the greenhouse gas methane from landfills has fallen dramatically (PDF).

‘I hope that we instead will get the waste from Italy or from Romania or Bulgaria or the Baltic countries because they landfill a lot in these countries,’ says Catarina Ostlund, a senior advisor for the country’s environmental protection agency. ‘They don’t have any incineration plants or recycling plants, so they need to find a solution for their waste.'”

Sweden, a recycling-happy land where a quarter of a million homes are powered by the incineration of waste, is facing a unique dilemma: The nation has run out of much-needed fuel.

Sweden, birthplace of the SmÃ¶rgÃ¥sbord, Eric Northman, and the worldâ€™s preferred solar-powered purveyorÂ of flat-pack home furnishings, is in a bit of a pickle: the squeaky clean Scandinavian nation of more than 9.5 million has run out of garbage. The landfills have been tapped dry; the rubbish reserves depleted. And although this may seem like a positive â€” even enviable â€”Â predicament for a country to be facing, Sweden has been forced to import trash from neighboring countries, namely Norway. Yep, Sweden is so trash-strapped that officials are shipping it in â€”Â 80,000 tons of refuse annually, to be exact â€”Â from elsewhere.
You see, Swedes are big on recycling. So big in fact that only 4 percent of all waste generated in the country is landfilled.
Good for them! However, the population’s remarkably pertinacious recycling habits are also a bit of a problem given that the country relies on waste to heat and to provide electricity to hundreds of thousands of homes through a longstanding waste-to-energy incineration program. So with citizens simply not generating enough burnable waste to power the incinerators, the country has been forced to look elsewhere for fuel. Says Catarina Ostlund, a senior advisor for the Swedish Environmental Protection Agency: â€œWe have more capacity than the production of waste in Sweden and that is usable for incineration.â€
Public Radio International has the whole story (hat tip to Ariel Schwartz at Co.Exist), a story that may seem implausible in a country like garbage-bloated America where overflowing landfills are anything but scarce.
As mentioned, the solution â€”Â a short-term one, according to Ostlund â€”Â has been to import (well, kind of import) waste from Norway. Itâ€™s kind of a great deal for the Swedes: Norway pays Sweden to take its excess waste, Sweden burns it for heat and electricity, and the ashes remaining from the incineration process, filled with highly polluting dioxins, are returned back to Norway and landfilled.
Ostlund suggests that Norway might not be the perfect partner for a trash import-export scheme, however. â€œI hope that we instead will get the waste from Italy or from Romania or Bulgaria or the Baltic countries because they landfill a lot in these countries,” she tells PRI. “They donâ€™t have any incineration plants or recycling plants, so they need to find a solution for their waste.”