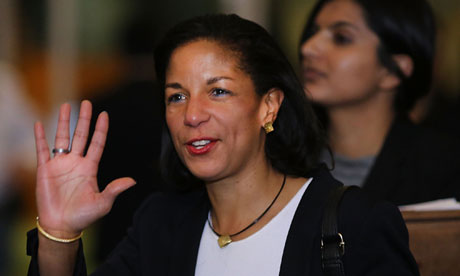 US Ambassador to the UN Susan Rice, who has withdrawn her candidacy to succeed Hillary Clinton as secretary of state. Photograph: Spencer Platt/Getty Images

At first the president passionately defended his friend. But when Susan Rice looked a liability, his poker player’s instincts kicked in

Fried Rice, cooked Rice, ground Rice â€¦ pick your own favorite snarky headline: after weeks of speculation, Susan Rice has officially withdrawn her name from consideration as secretary of state.

In one way, this is a surprising move. After all, it was only a few weeks ago that President Obama, fresh off re-election, offered an impassioned defense of his friend and current US ambassador to the United Nations. Beyond the personal attacks she was subjected to, the supposedly substantive criticisms of Rice â€“ that she went on the Sunday talk shows and lied about what happened in Benghazi last September when a US diplomat and three other Americans were killed â€“ were always ridiculous. So, then it seemed Obama was practically spoiling for a fight â€“ particularly since the loudest critic of Rice was his 2008 rival John McCain, for whom the president clearly has no love lost.

But in another way, this is completely typical Obama â€“ ruthless, pragmatic, cold-blooded. He took a look at the lay of the land in the Senate; decided that he had no appetite for a bruising confirmation battle in the midst of what is shaping to be a fierce fight over the fiscal cliff, and decided instead to push Rice over the edge.

In fairness, Rice didn’t give him a great deal of wiggle-room to work with. Since Obama’s stout defense of his UN ambassador, her reputation took hit after hit â€“ and it wasn’t just over Benghazi. Rice and her allies appeared incapable of mounting an effective PR campaign on her behalf.

There has been a steady stream of news stories that have poked holes at Rice’s qualifications for the top diplomatic job. First, there was this Roger Cohen op-ed in the New York Times, which quoted former UN Ambassador Thomas Pickering criticizing her conduct as US assistant secretary for African affairs. Pickering is as highly respected a foreign service officer as you will find in Washington: for him to come out and publicly question her judgment was an eyebrow-raising move.

Since then, there have been more stories: about Rice’s former work at the consulting firm Stonebridge on behalf of Rwandan strongman Paul Kagame; about her financial dealings and potential conflict of interest over the Keystone XL pipeline; and a devastating Daily Beast article about her supposedly suspect diplomatic “temperament”.

Here again, Rice did little to help herself by getting in an undiplomatic contretemps this week with the usually mild-mannered Chinese ambassador to the United Nations. Nonetheless, it was striking how many people were willing to make disparaging comments, off the record, about Rice â€“ a clear sign that it wasn’t just John McCain who didn’t want to see her get secretary of state.

Put all of this together and it raised legitimate questions about Rice’s suitability for the job. None of this is to say that â€“ had Obama fought for her â€“ she wouldn’t have won approval. It’s quite possible she would have gotten through the Senate hearing, but at what cost â€“ both to herself and to the Obama administration?

Instead of waging that fight, Obama cut his losses.

In the process, he’s set a terrible precedent: basically, he has given John McCain a scalp to hang in his Senate office and has made it appear that the phony Benghazi scandal was Rice’s undoing. The message sent to the Hill â€“ whether true or not â€“ is that if Republicans flap their gums and wave their arms enough, they can beat down the president.

Indeed, some would say this shows Obama simply doesn’t have the guts to stand up to Republicans. In reality, though, it shows how hardnosed a politician he really is. As a former poker player, he knows when to throw away a lousy hand even if he is being bullied into folding.

Now, Obama will likely choose John Kerry to be secretary of state â€“ a politician, ironically, who has less in common with the foreign policy views of John McCain than Susan Rice. As for Rice, she stands a good chance of now becoming national security advisor, a position that is almost certainly more powerful and influential than secretary of state.

That doesn’t necessarily make Obama’s decision to push Rice out the most appropriate one â€“ and don’t believe the public explanation that she withdrew her name from consideration of her own volition â€“ but it’s almost certainly the smart, pragmatic play. And no one ever confused Barack Obama with an overly emotional or stupid politician.