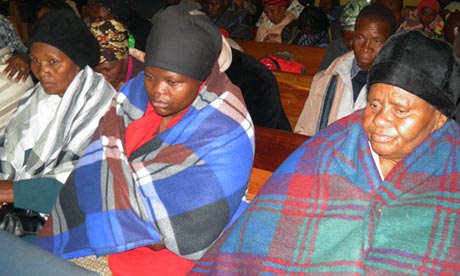 More than 1,000 people attend memorial at Marikana as services are held nationwide to honour those killed in violence

The families of 34 striking miners killed by police were among those who mourned as memorial services were held across South Africa for all those who have died in violence.

South Africa has one of the world’s highest murder and rape rates but was shocked by the shootings at the Lonmin mine in Marikana last week.

More than 1,000 people attended the memorial service the government arranged in Marikana.

The relative of a miner killed in the shootings said he wanted to see some arrests.

“If it were me I’d want everyone who was involved in this incident, including the mine managers, to be arrested, the whole lot of them, because a person’s life is not worth money,” Ubuntu Akumelisine said.

Mungiswa Mphumza, the sister of a dead miner from Eastern Cape, said she was at peace.

President Jacob Zuma called on the nation to commemorate not only the miners but all victims of South Africa’s violence.

The 34 miners were killed last Thursday when police opened fire on charging strikers. Another 10 people, including miners and police officers, died in the days before.

The day should be an opportunity for the nation to “mourn and promote a violence-free society”, said Zuma in a statement. The president did not attend any of the memorials.

Zuma demanded on Wednesday night that mine companies provide decent homes and sanitation for miners. He singled out one mining house where he said 666 workers shared four toilets and four showers, according to the Star newspaper. He did not name the company.

Zuma warned that those who did not comply with the mining charter requiring adequate housing risked losing their licences.

But the president said it was not a time for pointing fingers over the shootings.

“I won’t judge the incident. The judicial commission of inquiry will do so,” he said at a lecture in North West Province, home to the country’s troubled platinum mines.

Earlier this week, Malema joined miners as they went to file a criminal case of murder against the police for the shootings.

Other memorial services were being held around the country, including a service arranged by the Association of Mineworkers and Construction Union, one of the unions included in the dispute.