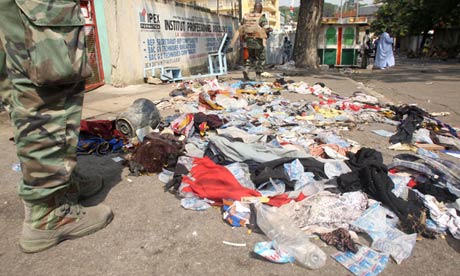 People stand next to clothing and items spread over the pavement at the scene of the fatal crush in Abidjan, Ivory Coast. Photograph: Herve Sevi/AFP/Getty Images

About 60 people have been crushed to death in a stampede outside a stadium in Ivory Coast‘s main city of Abidjan after a New Year’s Eve fireworks display.

The incident took place near FÃ©lix HouphouÃ«t-Boigny stadium where a crowd had gathered to watch fireworks, emergency officials said. One of the injured at a hospital said security forces had arrived to break up the crowd, triggering a panic in which many people fell over and were trampled.

Other reports said the crush happened when thousands of people who were trying to leave the festivities met another large crowd arriving at the same time.

“The provisional death toll is 60 and there are 49 injured,” the interior minister, Hamed Bakayoko, said in a statement on national television. “During the fireworks everything was proceeding normally,” Bakayoko said. “At the end of it people wanted to go home, back to their home districts.

“Near the Hotel Tiama and the HouphouÃ«t-Boigny stadium there was a stampede. We were notified of injuries and deaths, and as regards casualties, we learnt that there was a heavy toll. The circumstances surrounding the incident will form the subject of an investigation.”

President Alassane Ouattara, visiting injured people at the hospital, called the incident a national tragedy and said an investigation was under way to determine what had happened.

A Reuters correspondent said bloodstains and abandoned shoes littered the scene outside the stadium on Tuesday morning.

Assetou Toure, a cleaner, said: “My two children came here yesterday. I told them not to come but they didn’t listen. They came when I was sleeping. What will I do?” She did not know if her children had escaped unhurt.

According to the Associated Press a state radio and a fire department rescue worker, estimated that an additional 200 people were injured. The emergency worker said a crowd of thousands gathered at the HouphouÃ«t-Boigny Stadium to see the fireworks and after the display the crowds in the street became a crush in which people were trampled.

The incident was the worst of its kind in Abidjan since 2010, when a stampede at a stadium during a football match killed 18 people.

Ivory Coast, once a stable economic hub for west Africa, is struggling to recover from the 2011 civil war in which more than 3,000 people were killed.