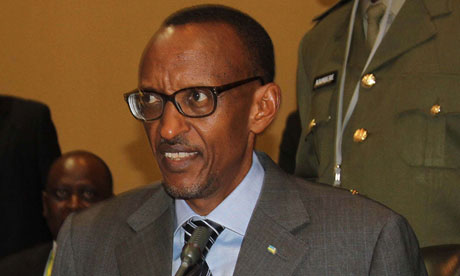 Rwanda‘s election to the UN security council on Thursday was branded a major embarrassment in the wake of a UN report claiming that the country is fuelling a violent uprising in a neighbouring country.

Rwanda was unopposed in its bid for a non-permanent African seat on the security council â€“ previously held by South Africa.

The timing of Rwanda’s ascent could hardly be more uncomfortable for the UN security council, whose own group of experts have produced a damning report of its support for the rebel M23 in the Democratic Republic of the Congo (DRC).

Atoki Ileka, Congo’s ambassador to France and former envoy to the UN, said: “It is a dreadful day and a very sad day for Africa because the security council is the UN body in charge of peace and security, and this is a country not committed to peace and security. It’s very embarrassing for the UN.”

Ileka remained hopeful, however, that the security council would “rubber stamp” the group of experts’ final report before Rwanda takes its seat. The report is due to be presented next month whereas Rwanda will not become a member until 1 January 2013.

From this date onward, however, there is the prospect of division and deadlock. The Congolese government is demanding that the security council impose targeted sanctions against Rwandan and Ugandan officials named in the UN experts’ report.

An unnamed western diplomat told Reuters that getting unanimity among the 15 council members on Congo’s rebellion would be difficult with Rwanda in the room.

Carina Tertsakian, senior researcher on Rwanda for Human Rights Watch, said before Rwanda’s election that its membership would present “a clear conflict of interest”, saying the country had “for several years undermined initiatives of the security council, for example the arms embargo on Congo”.

She added: “Our fear is that having a seat on the security council will enable Rwanda to protect its own officials from sanctions. For the victims â€“ Congolese or Rwandan â€“ of violent abuses by M23, this is a real affront.”

An extract of the UN report leaked to Reuters this week named the Rwandan defence minister general, James Kabarebe, a close ally of President Paul Kagame, as effectively commanding the rebellion. It also accused both Rwanda and Uganda of providing weapons, troops and military and political aid to the M23 rebels in their six-month fight against Congolese government troops.

The report has also intensified pressure on Britain to review its decision to restore Â£16m of aid to Kagame’s government.

Five security council seats were due to be filled in elections on Thursday. There are five veto-holding permanent members of the council â€“ the US, Britain, France, Russia and China â€“ and 10 temporary members without vetoes.

Rwandan UN diplomat Olivier Nduhungirehe had said his country was not worried about the report harming its security council bid. “The members of the general assembly know exactly what our record is and they cannot be deterred or swayed by a baseless report, which has no credibility,” he told Reuters.

“We are the sixth [biggest] troop-contributing country for peacekeeping, we are a leading country in achieving the Millennium Development Goals, we have a record in post-conflict reconstruction and peace-building.”

After the UN vote a defiant if somewhat incoherent message was posted on Kagame’s Twitter account. “No matter what haters say dO-alwz justice&truth willprevail!!!” it said. “Sometimes it just requires a bit of good fight for allthat..!!! # UN VoTe”

Rwanda was last on the council in 1994-95, a period that coincided with the genocide of 800,000 Tutsis and moderate Hutus.