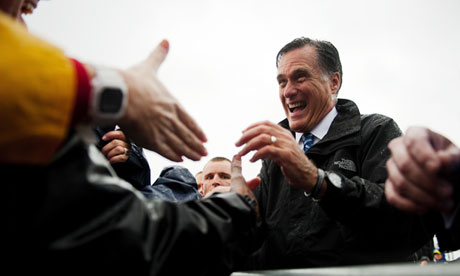 The storm clouds gathering over President Obama’s bid for re-election have thickened with the release of a new poll from the respected Pew Research Center that gives Mitt Romney a four-point lead among likely voters.

The Pew survey of 1,511 adults was carried out over four days starting on the day after the first presidential TV debate last week. Its findings â€“ including evidence that the Republican nominee is making dramatic headway with female voters, young people and those in the heartlands of the mid-west â€“ appear to confirm that Obama’s listless performance at the debate, and by contrast Romney’s strong showing, has translated into a powerful political force.

“We found a dramatic shift from a significant Obama lead to a slight Romney edge among likely voters â€“ and this is the first evidence that the debate appears to have impacted the race,” said Carroll Doherty, Pew Research Center’s associate director.

The poll records Obama and Romney on a direct tie of 46% each among registered voters, with Romney taking the lead by 49% to 45% among likely voters. The latter figure marks a striking turn-around in Romney’s fortunes: last month the Pew poll marked him behind by eight points among likely voters.

Romney’s widely lauded performance at the debate in front of almost 70 million viewers appears to have had a particularly favourable impact on several groups that had been assumed to be unassailable strongholds for Obama. Among likely female voters, the two contenders for the White House now stand neck-and-neck on 47%, in contrast to a month ago when Romney trailed by a whopping 18 points.

Support among voters under 50 has bounced in the past month for Romney by no fewer than 10 points, from 39% to 49%, and he now even leads among this demographic over Obama on 46%.

The one feature that appears to be driving this sharp improvement in Romney’s standing was the debate. Two-thirds of registered voters in the poll said that they thought Romney did the better job during Wednesday’s televised head-to-head, with only 20% backing Obama.

What is not clear is whether a post-debate bounce for Romney will last as the race for the presidency enters its final month. The latest tracking poll from Gallup has the two candidates on a 47% tie.

One factor that could prove significant in terms of the final days of the campaign is that, in the Pew poll, the ground soldiers of the Republican party appear to have been energised by Romney’s perceived debate victory. Some 67% of Romney’s supporters said they now back him strongly, up from 56% in September.

Engagement is one aspect of Romney’s candidacy that the Republicans have been struggling with all year, including through the primary season when he was regarded with widespread suspicion by staunch conservatives as a result of the liberal policies â€“ including healthcare reform â€“ that he pursued while governor of Massachusetts. Romney needs a revitalised base if he is to wage an energetic get-out-the-vote ground operation come November.

“This is perhaps the most important aspects of the results, that Republicans come out of the TV debate very energised,” Doherty said.

The poll will give Obama’s top re-election advisers, led by David Axelrod, food for thought on how they are faring in terms of owning political issues. On the single most important policy area, the economy, Romney shows a 13-point lead among vital swing voters when asked who would do the better job on the job situation (Romney polled 37% to Obama’s 24%).

The Republican candidate is still seen as favouring the rich, but he is now given more credit by voters for policies that would help middle-class Americans, up from 41% in July to 49% today.

In other policy areas, Romney has effectively closed the gap with the president over Medicare and health care, and is just four points behind Obama on foreign policy having lagged by 15 points last month.

The Pew poll, conducted nationally, does not give a deep insight into what’s happening in the vital swing states of Ohio, Florida, Virginia and elsewhere. The impact of the TV debate on these battle grounds will have to wait until state-wide polls are published.

It does though give one intriguing finding, showing a six-point lead for Romney in the Midwest.

The signs that Romney is making a spirited rally in the wake of his morale-boosting success on primetime TV will pile on the pressure on Joe Biden. He faces his only vice-presidential debate with Romney’s running mate, Paul Ryan, on Thursday night, with two further presidential debates following later in the month.