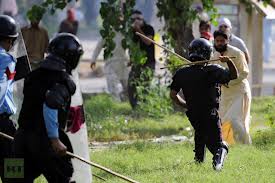 This article titled “Religious intolerance on the rise worldwide, says US report” was written by Peter Beaumont, for guardian.co.uk on Thursday 20th September 2012 14.31 UTC

The US and UK, say the researchers, are among countries showing a worrying rise in religious discrimination.

The conclusions of the project, conducted by the Pew Research Centre, an American thinktank,‘s Forum on Religion and Public Life, were published on Thursday. The analysis, of 197 countries and territories, identifies a sharp rise in religious limits globally and a 6% increase in restrictions in the four years until 2010.

The survey, The Rising Tide of Restrictions on Religion, is the second successive one by Pew to note increasing intolerance worldwide.

Painting a stark picture of a "rising tide" of intolerance and government restrictions on religious matters, the report cites evidence including "crimes, malicious acts and violence motivated by religious hatred or bias, as well as increased government interference with worship or other religious practices".

The project notes an acceleration in intolerance, reporting a 63% rise from mid-2009 to mid-2010 in numbers of countries that increased government restrictions, in comparison with Pew’s last survey that had noted a 56% rise.

Remarking on the trend, the report says: "The number of countries where harassment or intimidation of specific religious groups took place rose from 147 as of mid-2009, to 160 as of mid-2010."

In the survey the UK is second among countries marked "high" â€“ on a scale from very high, the top offending countries, to low â€“ with regard to "social hostility", one of the two indices used to evaluate levels of intolerance.

The ranking puts the UK, on the table of descending scores, in the next place down below Kenya, and at one place above Burma. The ranking marks a rise for the UK since the last survey. In Europe only Russia fared worse.

In the second index â€“ covering government restrictions â€“ the UK remains on the "moderate" list.

Commenting on the UK’s social hostility placing, a lead researcher, Brian Grim, said the rise had been driven by several issues. "That included Christians voicing concern about being able to talk about their religion, a spike in antisemitic incidents and also anti-Muslim sentiment. It also included concern about issues within the Muslim community itself and honour killings."

In the period covered by the survey there had been an upsurge in sectarian tension in Northern Ireland which had since subsided.

"From mid-2009 to mid-2010," the report’s authors note, "a number of the sources used in the study reported an increase in the number of incidents at state and local level in which members of some religious groups faced restrictions on their ability to practise their faith."

These included "religious groups in the US [which had] faced difficulties in obtaining zoning permits to build or expand houses of worship, religious schools or other religious institutions".

The report also noted legislation by some states to ban "sharia law", or prevent construction of mosques.

The percentage of the world’s population living in countries with low levels of restriction, the report calculates, fell between 2007 and 2010 from 14% to 6%.

The report is being published amid a rash of protests in the Muslim world following the posting online of a videospoof that mocks the life of Muhammad.

The survey reports that in all five main regions of the world â€“ including the Americas and sub-Saharan Africa where religious restrictions previously had been declining â€“ freedom of faith is coming under increasing pressure.

While the survey notes growing religious restrictions in places where that might be expected, including in Nigeria which has seen a spate of attacks against Christians, as well as in Indonesia, where pressure from Islamists forced dozens of churches to close, it also identifies growing problems in some western democracies including Switzerland, which, in 2009, banned the construction of minarets, and the US.

The report â€“ which detailed religious freedom up until the end of 2010 and is the third such survey Pew has carried out â€“ says it identified a four-year high involving "harassment or intimidation of particular religious groups" â€“ including five out of seven of the main religious groupings â€“ including Jews, Christians, Buddhists and adherents of folk or traditional religions.

Not all religions, however, faced harassment in the same way.

"Christians," the survey reports, "were harassed by government officials or organisations in 95 countries in the year ending in mid-2010 and by social groups or individuals in 77 countries.

"Muslims also were more likely to be harassed by governments (74 countries) than by social groups or individuals (64 countries). Jews, by contrast, experienced social harassment in many more countries than they faced government harassment."

Using these two scales the authors identified a rise in countries with "very high" levels of government curbs â€“ from 10 in 2007 to 18 in 2010.

In that period 10 countries were added to the list of countries with very high levels of restriction â€“ Afghanistan, Algeria, Azerbaijan, Belarus, Indonesia, Maldives, Russia, Syria, Tunisia and Yemen â€“ while only two, Brunei and Turkey, were downgraded.

North Korea was excluded from the study because of the difficulty of accessing up-to-date information.

Perhaps more telling has been the increase in countries experiencing social hostilities over religion, with four times as many countries (17) showing a marked increase as had seen a decrease (four).

The increase in religious curbs comes as recent surveys have appeared to demonstrate that people around the world are becoming more religious.