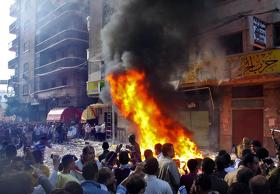 A febrile and polarised Egypt turned on itself on Friday as widespread protests spread across the country pitting supporters of the Islamist president Mohamed Morsi against his political opponents over a controversial new decree granting him extensive new powers.

Anti-Morsi demonstrators, who accuse the president of having launched a “constitutional coup” on Thursday, were reported to have set fire to the offices of the Muslim Brotherhood’s Freedom and Justice party, to which Morsi belongs, in the Suez Canal cities of Suez and Port Said.

Clashes also erupted between the two sides in the Mediterranean city of Alexandria, the southern city of Assiut and in Giza, prompting Essam el-Erian, a leading figure in the FJP, to condemn the attacks as “acts of thuggery hiding behind political forces”.

In Cairo the two opposing camps gathered in large rival rallies in different parts of the capital.

In a packed Tahrir Square, youths opposed to the decree fought intermittent battles with police firing volleys of tear gas outside the French LycÃ©e and American University. Morsi’s Muslim Brotherhood meanwhile bussed in supporters from across the country to hear him address a rally outside the presidency in Heliopolis.

Morsi’s decree orders the retrial of former president Hosni Mubarak, officials and security force members accused of killings during the country’s revolution. Controversially, it also exempts all of Morsi’s decisions from legal challenge until a new parliament is elected, as well as offering the same protection to the Islamist dominated constituent assembly, which is drawing up the country’s new constitution.

Morsi’s aides said the presidential decree was to speed up a protracted democratic transition that has been hindered by legal obstacles. Morsi’s rivals, however, were quick to condemn him as a new autocratic pharaoh who wanted to impose his Islamist vision on Egypt.

Morsi made the move in a week in which he had been buoyed by accolades from around the world for mediating a truce between Hamas and Israel. “I am for all Egyptians. I will not be biased against any son of Egypt,” Morsi said on a stage outside the presidential palace, adding that he was working for social and economic stability and the rotation of power. “Opposition in Egypt does not worry me, but it has to be real and strong,” he said in response to his critics.

He added: “There are weevils eating away at Egypt’s nation,” accusing some judges of planning to disband the upper house of parliament.

Morsi accused protesters who had been involved in clashes this week in central Cairo of being “thugs” paid with money stolen during the old regime to disrupt the revolution.

Despite the attempts by Morsi and his aides to defuse the tension, insisting the new measures were temporary, those attending the rival rallies made clear that far more difficult issues were at stake for the two camps.

Among those who attended the Morsi rally was Nour din-Mohamed, a broadcast personality on a Muslim Brotherhood television channel noted for his sarcastic critiques of opponents of the movement. Surrounded by admirers he said: “The people gathering in Tahrir are trying to blackmail the revolution. Revolution means change and they are standing in the way of it.

“The decree was a matter of necessity. The revolution was not just about changing Mubarak’s name to Morsi, it was about transforming our society. That progress was being delayed. If Morsi had not pushed on this matter we would have pushed him harder.”

As he spoke, a loudspeaker address from a makeshift platform accused those in Tahrir of trying to prevent the imposition of sharia law, while others chanted in favour of the implementation of Islamic law.

In other signs that the move by Morsi might have a wider significance, many carried printed sheets of paper demanding that Egypt’s media, which has been generally hostile to the decree, should also be “cleansed” after Morsi’s moves against the judiciary on Thursday that saw him sack the Mubarak era chief prosecutor.

Isam Ashour, a 45-year-old sports teacher from near Alexandria, accused those in Tahrir Square of not “wanting stability”. “They are just young people and the homeless. They want chaos to prevail or to protect their on interests.”

In Tahrir Square, the symbol of the country’s revolution last year, a different crowd assembled including revolutionary youth, political figures from the country’s secular opposition groups and the well-heeled from Cairenes. “The people want to bring down the regime,” shouted protesters in Tahrir, echoing a chant used in the uprising that forced Mubarak to step down, and “Get out, Morsi”.

As security forces fired gas at protesters on streets leading to the Ministry of the Interior and French LycÃ©e, frequent clash points, others were engaged in heated conversations about the Muslim Brotherhood’s latest moves.

Among them was Dr Gamal Zahran, an independent MP from Port Said, who had been a member of the country’s dissolved lower house of parliament.

“What Morsi has done should be considered a coup against constitutional legitimacy. Today you see people from the different civil and political groups in Egypt pitted against each other,” he said. “The decree has polarised us. Not Muslim against secular. But between the Muslim Brotherhood and its Salafist allies and those who oppose them.

The protests against the decree appear â€“ for now at least â€“ to have united the fissiparous and largely secular opposition to the Muslim Brotherhood.

“The decree is basically a coup on state institutions and the rule of law that is likely to undermine the revolution and the transition to democracy,” said Mervat Ahmed, an independent activist in Tahrir protesting against the decree. “I worry Morsi will be another dictator like the one before him.”

Sherihan el-Meharak, a young woman pharmacist, was also in the square.

“I have come because I want to protect my freedom,” she said. “Morsi is going against the country. I can’t allow that to happen.”

Morsi had tried to sweeten the pill of the decree with the announcement that he would end impunity for those involved in ordering and carrying out the killings of 800 protesters during the revolution and several hundred more in the months that followed, a popular measure. But his appropriation of new powers appears to have spectacularly backfired, exacerbating already deepening faultlines in Egyptian society.

While many accept the need for reform of a judiciary in which former Mubarak-era officials still have prominent positions, and which has been used by some to challenge the creation of new institutions, the way he has gone about it has escalated suspicions about the Brotherhood’s plans for Egypt.

Samir Morqos, a Christian Coptic presidential aide, resigned his position in objection to the decree, saying that he had not been informed of the president’s declaration beforehand and only learned about it from the televised announcement by a presidential spokesman. He described the move and Morsi’s reluctance to consult with his aides as “undemocratic”.

It has not only been in Egypt that Morsi’s move has been causing concern. On Friday a spokesman for the UN human rights commissioner, Navi Pillay, added to the mounting sense of crisis.

“We are very concerned about the possible huge ramifications of this declaration on human rights and the rule of law in Egypt,” said Rupert Colville at the United Nations in Geneva.

The EU also expressed its concern. “It is of utmost importance that the democratic process be completed in accordance with the commitments undertaken by the Egyptian leadership,” a spokesman for Catherine Ashton, EU foreign policy chief, said in a statement.