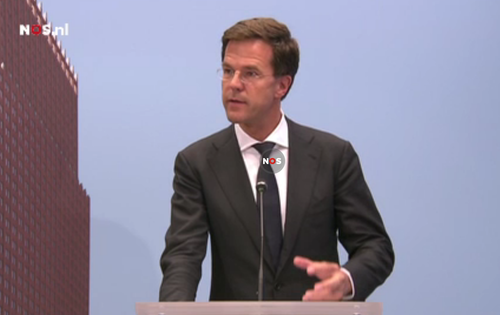 Dutch prime minister Mark Rutte has described as ‘disgusting’ pictures of Ukraine rebels digging through the possessions of people killed in disaster.

In a short news conference, Rutte said he had just had a ‘very intense’ phone call with Russian president Vladimir Putin. ‘I told him “time is running out for you to show the world that you have good intentions, that you will take responsibility”,’ Rutte said.

Putin now ‘has to show that he will do what is expected of him and will exert his influence,’ the Dutch prime minister said.

‘It is 35 degrees there. The bodies need to be recovered now. I want to see results, unhindered access and the repatriation of the victims.â€™

The phone conversation with Putin was ‘very personal’, the Dutch prime minister said.

â€˜I think the entire Dutch population knows people who directly or indirectly know someone who was on board. There were 80 people under the age of 18, of whom 23 were under the age of 12 and three were babies. It is too terrible for words.â€™

Images of rebels holding up children’s toys were ‘too disgusting for words’, Rutte said. Such action is also hindering the investigation into the crash, he said.

Earlier on Saturday, Dutch foreign minister Frans Timmermans met Ukrainian president Petro Poroshenko in Kiev and told him the Netherlands was ‘angry, furious’ at the news that bodies were being dragged around the crash site, Reuters said.

‘Once we have the proof, we will not stop before the people are brought to justice. Not just the people who pulled the trigger but also those who made it possible. I think the international community needs to step up its efforts in this respect,’ Reuters quoted Timmermans as saying.

According to Dutch broadcaster Nos, Poroschenko in turn told Timmermans it is unacceptable that international experts are being denied access to the disaster zone.

â€˜We will not tolerate interference with the work of the commission and that those representatives of other countries do not have the possibility of conducting an objective investigation,â€™ Poroshenko is quoted as saying.

However, the separatists deny interfering, Nos television reports. It quotes â€˜one of their commandersâ€™ as saying they have promised the OSCE that they will not touch bodies or the remains of the plane.

As well as Dutch, Malaysian and Ukrainian researchers have arrived in the region to begin investigating the crash. Two German forensic pathologists are also on their way to Ukraine, as is a six strong-British team, Nos television said.

Malaysia Airlines released the full passenger list on Saturday. The Dutch death toll is now put at 193, out of 298 people on board the plane.