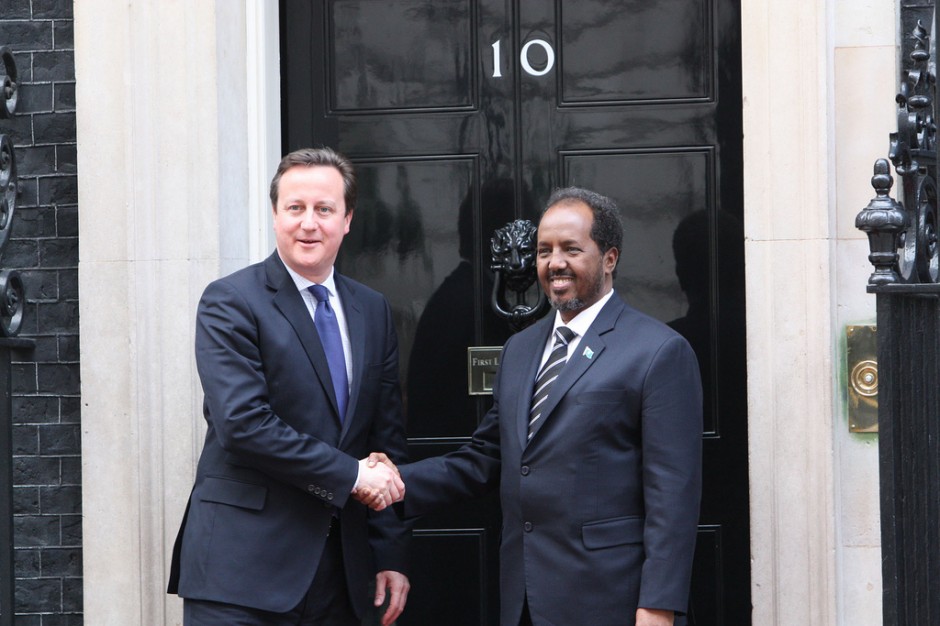 Cameron and President Mohamud of Somalia shake hands for the revered photo-shoot between visiting dignitaries and the British premier at No 10 Downing Street. There was no such thing for Kenyan and Ugandan leaders who are largely responsible for bringing peace to Somalia.

By: By Henry D Gombya for the London Evening Post.

The United Kingdom today stands accused ofÂ â€™humiliatingâ€™ the leaders of two countries that have made peace possible in what was until only recently a failed Horn of Africa country that comes under the name of Somalia, by making sure that they were not photographed alongside British Prime Minister David Cameron.

Â After the failure of what was once the worldâ€™s only super power, the United States of America (USA) to bring order to a battle-ridden Somalia, and after the failure of Ethiopia under the leadership of the late Prime Minister Zenawi to do the same, in came Uganda under the leadership of President Yoweri Museveni who sent in Ugandan soldiers to take on the Somali fighting tribes, especially the al Qaeda-leaning Al Shabaab.

Â While other countries like Burundi have also played their part in stabilising Somalia, Ugandanâ€™s leading role is unmistakeable. And less than two years ago, Kenya joined in when former President Mwai Kibaki ordered his troops to take on the Al Shabaab. It could be fair to argue that without the input that these East African countries have displayed, Somalia would today still be a failed state with warring armies controlling different parts of the country.

Â At yesterdayâ€™s Somalia conference, the Kenyan and Ugandan leaders were largely ignored and British officials went out of their way to make sure that British Prime Minister David Cameron was not photographed with any of them. And with Kenyan President Uhuru Kenyatta, it was certainly embarrassing that a leader who has just come to power through a rare free and fair election in Africa could not be offered a photo opportunity with the British Prime Minister after he (Kenyatta) made Britain the first country he has accepted to visit since his election last March.

While Kenyaâ€™s leading English daily, the Daily Nation ran with a headline that Mr Kenyatta had held talks with the British premier, it was quite surprising that not a single photo appeared anywhere to confirm this meeting. Frantic searches by this online newspaper in the Downing Street photo library as well as that of the British Foreign and Commonwealth Office (FCO) did not find any evidence that Mr Kenyatta or President Museveni had been given a photo opportunity, if only for Britain to thank them for sacrificing their soldiers to bring peace to Somalia, something that the mighty USA failed to do and what no British Prime Minister dared to get involved in.

Â The only evidence we found that Mr Kenyatta had held talks with the British Government was when the FCO sent us a press release stating that British Foreign Minister William Hague had held talks with Mr Kenyatta. There was no mention at all of similar talks having been held with Mr Cameron. And as is usually the case when such a high profile visitor meets either the Foreign Secretary of the Prime Minister, a photo was indeed available showing Kenyatta sitting down with Mr Hague in Lancaster House where the Somali Conference was held. There was neither a press statement regarding the meeting, nor any photo that this meeting had taken place.

We were also able to find that while Kenyatta and Museveni were ignored, Somali President was feted and there were plenty of photo opportunities accorded to him and the British Prime Minister. While President Hassan Sheikh Mohamud was photographed in front of the famous entrance to the British Prime Ministerâ€™s official residence, No 10 Downing Street and was also pictured arriving at Lancaster House with Mr Cameron, the only photo available to the media was that of President Kenyatta being welcomed to Lancaster House by the British Africa Minister Phillip Hammond. There were also other photos of Kenyatta at the Somalia Conference but in most of them, those photographed with him had been carefully edited out.

While President Kenyatta was largely ignored by his British hosts, he did not show any ill-feelings and was seen throughout the day in what one can describe as a jovial mood. On the other hand, the Ugandan leader who has been in power since 1986, showed obvious signs that his long stay in power may be taking its toll. He looked tired and uninterested in whatever was going on around him.

In a press release after meeting the Kenyan President, Mr Hague said both countries had discussed how best to support the Somali government. Mr Hague added that Britain recognised the vital role Kenya had played in contributing troops to the African Union forces and was also aware Kenyaâ€™s role in offering refuge to Somali refugees.

Referring to the International Criminal Court (ICC) case that is hanging around Mr Kenyattaâ€™s neck, Mr Hague acknowledged â€˜President Kenyattaâ€™s commitment to the judicial processâ€™. Speaking to the press after the meeting he said: â€œI expressed gratitude for Kenyaâ€™s significant contribution to bringing security to Somalia through the AU Mission in Somalia, and welcomed the progress made in recent discussions between regional leaders and the Somali President on building political stability in Somalia.â€

Mr Kenyatta and his deputy William Ruto are under indictment by the ICC for crimes against humanity following the disturbances in the 2007 general election where an estimated 1100 people were killed in the aftermath of the disputed results. Both deny the allegations and have vowed to clear their names.https://www.kenya-today.com/global/presidents-uhuru-kenyatta-and-museveni-humiliated-in-london