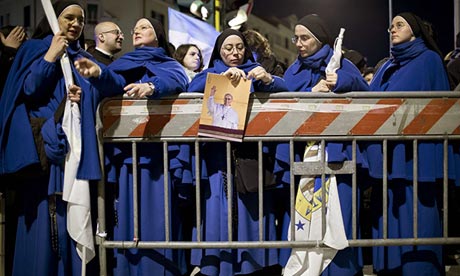 Nuns line up for the inaugural mass of Pope Francis at St Peter’s Square in the Vatican. Photograph: Oded Bality/AP

Crowds have begun assembling in Rome, where Pope Francis is to celebrate his inaugural mass in the presence of political and religious leaders from around the world.

Hundreds of thousands of people are expected to cram into St Peter’s Square and the surrounding streets in the Vatican City for the formal installation of Francis as the new leader of the world’s 1.2 billion Roman Catholics.

Six heads of state, the US vice-president, Joe Biden, and other leaders as well as heads of many other faiths will be among the 130 delegations on the steps of the famous basilica.

Among them will be Ecumenical Patriarch Bartholomew from Istanbul. It will be the first time the spiritual head of Orthodox Christians has attended a Roman pope’s inaugural mass since the Great Schism between western and eastern Christianity in 1054.

The former Buenos Aires cardinal Jorge Bergoglio has aroused enormous enthusiasm and interest in the Catholic world by the modest way he has assumed a post that was modelled after a Renaissance monarchy and carries titles including Vicar of Jesus Christ and Supreme Pontiff of the Universal Church.

In the six days since his election, Pope Francis has referred to himself only as Bishop of Rome, the position from which his authority flows, and hinted that he planned to reduce Vatican centralism and govern in consultation with other bishops.

Vatican watchers expect him to send further signals of change by using a simpler liturgy than retired Pope Benedict, who preferred a more baroque style.

The ceremony has been shortened to two hours after a three-hour service in 2005 when Benedict began his papacy. Francis will start the day with a ride around St Peter’s Square to greet the crowds. He will receive the visiting political leaders in the basilica after the mass.

On Wednesday, Francis will receive more than 30 delegations representing other Christian churches, as well as the Jewish, Muslim, Buddhist, Sikh and Jain religions, a Vatican spokesman said.

He will address foreign ambassadors to the Vatican on Friday and on Saturday have lunch with Benedict â€“ their first meeting since the conclave â€“ before leading celebrations the next day for Palm Sunday, the first day of Holy Week leading to Easter.

Francis had his first taste of the diplomatic challenges of the papacy when on Monday, the Argentinian president, Cristina Fernandez, asked him to support Buenos Aires in its dispute with Britain over the Falkland Islands. A Vatican spokesman had no comment on the request.

He will find himself greeting an international pariah, the Zimbabwean president, Robert Mugabe, who has been under a European Union travel ban since 2002 because of allegations of vote-rigging and human rights abuses. The Vatican is not part of the European Union, allowing Francis to bend the rules on such sanctions.