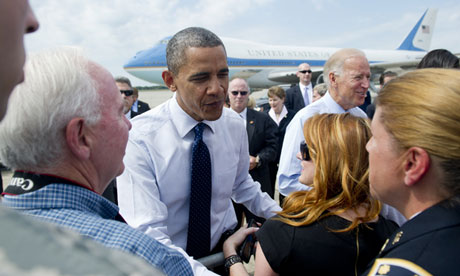 The Democratic party’s euphoria at the close of its party convention in Charlotte evaporated within hours when the US government published a dismal set of unemployment figures that threatened Barack Obama‘s re-election chances.

Obama had fired up the party faithful with a speech that pleaded for a second term but recognised that economic recovery would be slow. “I won’t pretend the path I’m offering is quick or easy,” he said.

But on Friday morning, the department of labor revealed that the US economy had added only 96,000 jobs in August, well below expectations. The figures undermined the president’s oft-repeated argument that his policies, while slow to bring results, are on the right track.

The Republican presidential candidate Mitt Romney declared the figures to be an indictment of Obama’s economic policies. “If last night was the party, this morning is the hangover. For every net new job created, nearly four Americans gave up looking for work entirely,” Romney said.

The White House response to the unemployment figures was muted, saying the economy is continuing to recover but more work remained to be done.

Republicans are banking on the sluggish economy to take them to the White House. There are two more sets of unemployment figures still to be published, the last just four days before the election on 6 November. No US president since the Great Depression has won re-election with unemployment so high.

Democrats had been buoyed by their three-day convention, dominated by an inspired speech from Bill Clinton on Wednesday night and Obama’s more pragmatic address late on Thursday night.

But the jobs figures cast a pall over the celebrations. Although the headline figures showed a drop from 8.3% to 8.1% the fall was mainly attributed to people giving up the search for work. Only 96,000 new jobs were created in August compared with 141,000 in July â€“ well below the rate of population growth. Pressure is building on the Federal Reserve, when it meets on 12 September, to intervene to stimulate the economy.

With the conventions over, the election campaign now begins in earnest and voters beginning to pay attention. Obama, within hours of his convention speech in which he formally accepted the party’s nomination to fight the election, headed off early Friday morning on a punishing campaign schedule that took in Iowa and New Hampshire and a two-day bus trip across Florida beginning Saturday.

The Obama campaign teams admits the election is going to be close. Polls have shown Obama and Romney almost neck-and-neck for months. A Reuters/Ipsos poll on Thursday put Romney on 45% to Obama’s 44%.

Over the next two weeks, with voters more fully engaged in the campaigns, the coming polls will provide the first genuine indication of who is likely to win the White House.

But now it is the turn of the Romney campaign to spend big, releasing on Friday 15 new television ads in eight battleground states. Over the next two months, the Romney campaign, backed by Super Pacs â€“ political action committees formed by small groups of mainly wealthy supporters â€“ is expected to outspend Obama by two to one.

The Democrats nevertheless had the better of the conventions. The Republican event in Tampa, Florida, was disrupted by hurricane Isaac and there was a palpable lack of enthusiasm for Romney as the GOP’s presidential candidate. The delegates were overwhelmingly white and generally older.

The Democratic convention was also disrupted by weather. Obama’s speech had to be moved from a 73,000-seater football stadium to a 23,000-seater smaller arena, leaving disappointed ticket-holders, mainly party volunteers, to line up for seats at a screening in the nearby convention centre. The thunderstorms that party officials had cited as the reason for the venue change failed to materialise. Republicans claimed it was moved because Obama would not be able to fill the stadium and feared television images of empty seats.

But the Democratic convention had more energy, with a party atmosphere in Charlotte. The delegates were more representative of America, much more diverse than the Republicans in terms of ethnic background, with more young people and a 50-50 split between men and women.

After Clinton’s barnstormer on Wednesday, Obama struck a more low-key approach on Thursday, his tone more subdued compared with the sense of euphoria he created at the Denver convention four years ago.

The more sober approach was deliberate, a recognition of the mood of disenchantment among some voters, tired of fine oratory and more interested in his plans for a second term.

Obama hinted that he would, if re-elected, embark on a bold and ambitious Franklin Roosevelt-style New Deal programme, but offered few details.

Instead, he called for patience.”You didn’t elect me to tell you what you wanted to hear. You elected me to tell you the truth. And the truth is it will take more than a few years for us to solve challenges that have built up over decades,” he said.

Obama was careful to recognise his own shortcomings, at one point telling the crowd that one of the differences from 2008 was that he was “far more mindful of my own failings, knowing exactly what Lincoln meant when he said: ‘I have been driven to my knees many times by the overwhelming conviction that I had no place else to go.'”

Among Obama supporters leaving the arena after the speech, Sandy Blakney, 54, a psychiatrist from the Raleigh area of North Carolina, said she understood why Obama had adopted a low-key approach.

“He did a little bit of the soaring rhetoric but in general his tone was a little more subdued, a little bit more serious,” she said. This reflected the gravity of the economic crisis he faced on taking office.

She added another reason. “He does not want people to think he has become over-confident.”