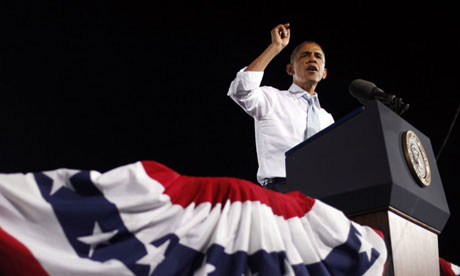 Romney and the president have both tried to play up the other side’s debate skills, but latest poll favours Obama nonetheless

Barack Obama has lost the first round in the run-up to the presidential debate in Denver on Wednesday, with a poll showing his campaign team failed in the contest to play down expectations.

Both the Obama and Mitt Romney campaign teams for the last fortnight have been trying to lower expectations about their respective candidates and talking up their opponents.

In spite of this, an ABC/Washington Post poll showed that registered voters by a two to one margin expect Obama to win the crucial debate.

The figures can be read as a vote of confidence in Obama, an expectation that he is a better performer than Romney, often portrayed as “wooden” as a speaker. But there is a big downside for Obama going into a debate as favourite in a debate estimated to attract a viewing audience of between 50-60 million.

If the debate is judged to be a draw or even a win for Obama, that outcome would be largely discounted because he fulfilled expectations. By contrast, with expectations of Romney low, even a modest performance could be potrayed by his team as win.

Obama is ensconced in a resort on the outskirts of Las Vegas, preparing for the debate while Romney has opted to base himself in Denver.

Obama, in his final rally in Las Vegas on Sunday night before retreating into purdah, made a last attempt to lower expectations.

“I know folks in the media are speculating already on who’s going to have the best zingers,” he said. The crowd shouted: “You are.”

Obama replied: “I don’t know about that. Governor Romney, he’s a good debater.”

Romney badly needs a good showing to reverse the growing perception that he is a loser, after setback after setback, from his overseas trip in the summer to an uninspired convention. He was not helped by the 47% secret video a fortnight ago, or recent polls in swing states putting Obama ahead.

In a preview of what lines of attack he might pursue on Wednesday, the Republican party put out a lengthy press release listing issues on which it claimed Obama had abused trust, including immigration, the deficit and renewable energy.

Romney’s campaign team is divided over strategy for the remaining five weeks, particularly over how hard to pursue the shifting White House version of events of the Libyan killings.

Some of his advisers want to keep the focus almost exclusively on the economy, seeing that as the key to eventual victory on November 6. Others argue that the unrest in Libya and elsewhere in the Middle East offers a badly-needed opportunity to shake up the election race.

There will, in theory, be little opportunity to make the Wednesday debate about foreign policy, having agreed in advance to devote it to domestic issues and leave foreign policy to the third and final debate.

Romney, in an article in the Wall Street Journal published Monday, reiterated his argument that Obama had failed in the Middle East by not staying close enough to Israel, by being too weak in the showdown with Iran and by failing to make the most of the Arab Spring.

Referring to the killing of US ambassador Chris Stevens and three other Americans at the consulate in Benghazi, Libya, he wrote: “We needed a strategy for success, but the president offered none. And now he seeks to downplay the significance of the calamities of the past few weeks.”

The White House, the state department and the US mission at the UN have veered between ascribing the Benghazi attack to militia spontaneously taking advantage of a riot over anti-Muslim film to a pre-planned assault by a group linked to al-Qaida.

The ABC-Washington Post poll, in line with others over the last fortnight, show Obama ahead. Sixty-three percent of registered voters said they expect he will win re-election and 56% to 29% expect him to win the Denver debate.
Although Obama is ahead nationally, it is only by 49% to 47%, a small enough margin for Romney to mount a comeback.

A poll in Iowa, for the Des Moines Register, which has a good record of accuracy, shows Obama ahead 49% to 45%, good news for him but a small enough margin for Romney to turn around one of the swing states.

In a new line of attack, the Democrats are sending out squads of legislators and officials from Massachusetts to swing states to talk about their experience of Romney when he was governor of the state.