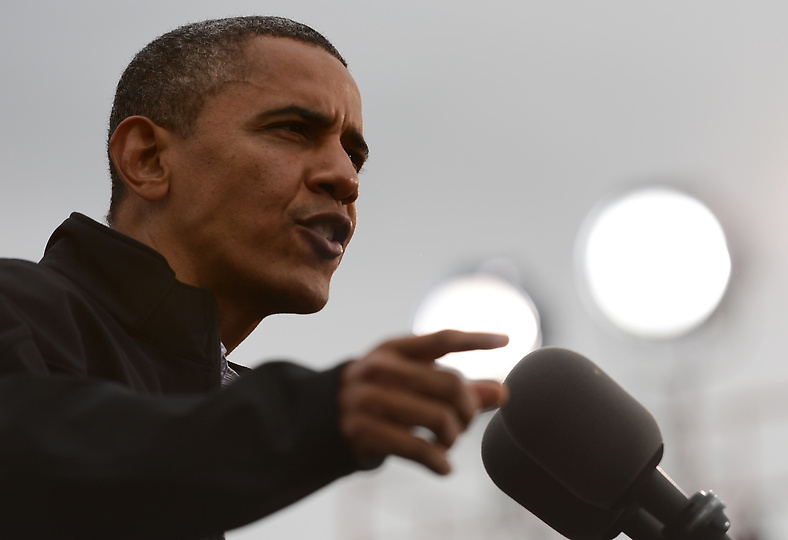 Barack Obama and the Democrats have accused Mitt Romney of dishonesty as they seek to limit the political damage from the president’s lacklustre performance in the first debate.

Speaking at a rally in Denver on Thursday morning before flying to another campaign event in Wisconsin, Obama suggested the Republican had not been candid about his positions on tax and other issues on the podium on Wednesday evening.

“Governor Romney may dance around his positions but if you want to be president, you owe the American people the truth,” he said.

“When I got on to the stage, I met this spirited fellow who claimed to be Mitt Romney,” Obama told the crowd. “But it couldn’t have been Mitt Romney, because the real Mitt Romney has been running around the country the last year promising $5tn in tax cuts that favor the wealthy. The fellow on stage said he didn’t know anything about that.”

The confident, fired-up appearance by Obama was in stark contrast to his performance in the debate when he seemed disengaged, and at time frustrated as Romney batted away attacks on his policies.

In one key exchange at the start, Obama said Romney was planning $5tn of tax cuts and had not explained how he was going to pay for those without increasing the deficit. Romney flat-out denied this was his policy.

But independent analysts have said the tax cuts he is proposing would total almost $5tn over 10 years, and that it would be “mathematically impossible” to pay for that solely by stopping tax breaks for high-income individuals.

Later, during a section on healthcare, Romney insisted that he had an alternative plan to ensure that people with pre-existing conditions were not discriminated against by health insurance companies. But after the debate, senior adviser Eric Fehrnstrom conceded that it would be down to individual states to introduce legislation to protect people with pre-existing conditions.

The Democrats are planning to hold Romney to account on these and other issues, Obama’s chief strategist, David Axelrod, told reporters in a conference call on Thursday morning.

“Governor Romney gave a good performance and we give him credit for that,” Axelrod said. “The problem is that none of it was rooted in fact.” Describing Romney as “devoid of honesty”, he also accused the Republican of lying over his claim that he would regulate Wall Street.

As the Obama team conducted its post-mortem, his campaign advisers faced questions about why Obama had appeared tired and uninterested, and about his failure to match Romney’s aggression.

Axelrod admitted that Democratic supporters would have been disappointed that Obama had not raised strong issues such as the Republican position on women’s rights, or the secret video showing Romney disparaging 47% of voters as freeloaders or his record as chief executive of the investment fund Bain Capital. Axelrod said the president had not wanted the debate to turn into a slugfest that would have alienated the millions of television viewers.

One of Axelrod’s counterparts in the Romney camp, Ed Gillespie, interviewed on MSNBC, defended Romney’s failure to go into the specifics of his tax plans, saying it would not make sense to box himself into a policy ahead of negotiations between a president and Congress.

“If you negotiate this now, you and me on the set or candidates in campaigns across the country, you end up locking people in positions in a political environment that makes it impossible to govern,” Gillespie said.

In the 90-minute debate, Romney was forceful from the start, accusing Obama of repeatedly portraying the Republican’s policies as inaccurate, and he maintained that momentum throughout. Obama, looking tired and at times irritated, remained largely calm.

Obama, seemingly frustrated with Romney’s elusiveness, retorted that it had been his opponent’s strategy for 18 months. “And now, five weeks before the election, he’s saying that his big, bold idea is: ‘Never mind'”.

At times, Romney patronised the president, saying that he did not understand business or accountancy. “Mr President, you’re entitled to your own airplane and your own house, but not your own facts,” he said at one point. In another powerful attack which is at the core of the Romney message, he listed unkept promises and told Obama: “You’ve been president for four years.”

The president, by contrast, was hesitant in his responses. One of the biggest surprises was that he failed to deliver any of the attacks that have been successful on the campaign trail and have been used to devastating effect in television ads in swing states. There was no mention of Romney’s disparaging remarks about the 47% of the population being freeloaders, nor of his opponent’s tenure at Bain Capital.

The main image of the night will be of Romney, eyes alight, gesticulating from the podium with a rarely seen passion, while Obama, playing into his image as professorial, delivered most of his answers with his head down.

On healthcare reform, Obama defended his controversial changes to expand coverage, saying it was almost identical to changes introduced by Romney while he was governor of Massachusetts.

Romney denied they were identical, claimed Obama’s plan increased costs and reiterated that he would repeal the reform.

“In my opinion, the government is not effective in bringing down the cost of almost anything. The right answer is not to have the federal government take over healthcare,” Romney said.