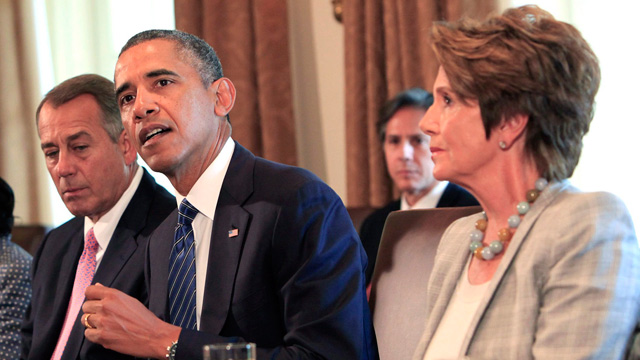 Barack Obama portrayed his plans for US military action in Syria as part of a broader strategy to topple Bashar al-Assad, as tougher White House rhetoric began to win over sceptical Republicans in Congress on Tuesday.

While stressing that Washington’s primary goal remained “limited and proportional” attacks, to degrade Syria’s chemical weapons capabilities and deter their future use, the president hinted at a broader long-term mission that may ultimately bring about a change of regime.

“It also fits into a broader strategy that can bring about over time the kind of strengthening of the opposition and the diplomatic, economic and political pressure required â€“ so that ultimately we have a transition that can bring peace and stability, not only to Syria but to the region,” he told senior members of Congress at a White House meeting on Tuesday.

Obama has long spoken of the US desire to see Assad step down, but this is the first time he has linked that policy objective to his threatened military strikes against Syria. It follows pressure on Monday, from senators John McCain and Lindsey Graham, to make such a goal more explicit.

The apparent change of emphasis appeared to resolve some of the political deadlock on Capitol Hill on Tuesday, as House speaker John Boehner and a series of other Republican leaders announced that they would back the president’s call for military authorisation from Congress. House majority leader Eric Cantor was most explicit, calling for the US to take sides in the “sectarian proxy war” against Iran.

“A well-designed and well-executed strike that deters the use of chemical weapons and diminishes the capacity of the Assad regime can contribute to the achievement of a clear and attainable goal: the ultimate displacement of the Assad regime by moderate elements within the opposition,” he said in a statement.

The endorsement of GOP leaders could be important in winning over the Republican-controlled House, where Obama has failed to win any support since his re-election in November. But even the Republican leadership has struggled to control Tea Party radicals in the House, and an anti-interventionist wing in the Senate led by Rand Paul remains a substantial challenge for the White House.

So far, the tougher US rhetoric does not seem to have deterred Democrats who back the president’s call for military action on humanitarian grounds. Emerging from the White House meeting shortly after Boehner, House minority leader Nancy Pelosi said Syria’s alleged used of chemical weapons was “outside the circle of acceptable human behaviour”, but said she would not whip Democrats into voting yes.

“I don’t think congressional authorisation is necessary, but I do think it is a good thing, and I think we can achieve it,” she added.

In his televised remarks, Obama repeated the US’s conclusion that Syria was responsible for chemical attacks on its own citizens. “We have high confidence that Syria used, in an indiscriminate fashion, chemical weapons that killed thousands of people,” he said. “That poses a serious national security threat to the United States and to the region and, as a consequence, Assad and Syria needs to be held accountable.”

With the chances of successful votes in Congress next week looking a little stronger, Obama will now head to Europe in the hope of persuading more world leaders to back his strategy. He arrives in Sweden on Wednesday for a short visit before attending the G20 international summit in St Petersburg, where he will face a frosty reception from his Russian hosts.

President FranÃ§ois Hollande of France called on Europe’s leaders to unite over Syria, but hopes in Washington that Britain might hold a fresh parliamentary vote over joining military action were dashed on Monday, when prime minister David Cameron ruled out such a move.

The White House first announced that it would provide limited military support to Syrian rebel groups in June, but it has been criticised for dragging its heels over fears that arms might fall into the wrong hands.

The alleged chemical attacks by Assad forces now seem to have strengthened the hands of those in Washington who favour more direct assistance. The New York Times reported on Tuesday that CIA-trained rebels were now operating inside Syria.