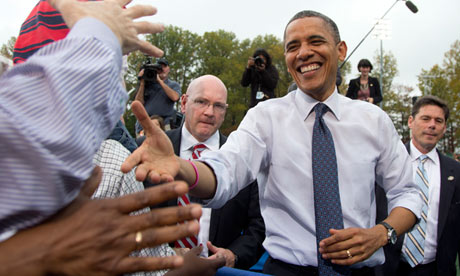 President to ready himself for foreign policy debate, with Mitt Romney expected to ask tough questions over Benghazi attack

Barack Obama is scheduled to fly to the Camp David presidential retreat near Washington later for three days of seclusion to prepare for the third and final debate with Mitt Romney on Monday as polls suggest the race remains too close to call.

Obama and Romney swapped jokes at a charity event in New York on Thursday night but there will be few jokes on Monday at the debate in Boca Raton, Florida, an encounter devoted to foreign affairs.

The president had enjoyed high approval ratings in foreign affairs until recently, mainly as a result of the killing on his watch of Osama bin Laden. But the Republicans see the president as vulnerable over the assault on the US consulate in Benghazi that left the US ambassador and three other Americans dead.

Obama’s 2008 Republican presidential opponent John McCain took the president to task Friday, over his choice of words during an interview on Jon Stewart’s Daily Show on Thursday night in which he oddly referred to the deaths as “not optimal”.

“The optimal line, of course, is very regrettable and makes me a little sad,” McCain told Fox.

Obama used the description in response to a question from Stewart, who was the first to use the word “optimal”.

Stewart said: “I would say, and even you would admit, it was not the optimal response.”

Obama replied: “Here is what I will say: when four Americans get killed, it’s not optimal.”

Romney fumbled a question about Libya in their second debate on Tuesday in New York, but will get a chance on Monday to redeem himself. The Republicans are questioning why the Obama administration has offered conflicting accounts of what happened at the consulate, by first blaming it on a demonstration by people allegedly upset over a US-made anti-Muslim film and later on al-Qaida affiliates.

McCain said it had been obvious to him soon afterwards that it was more than just a demonstration. “You really don’t have to be a CIA analyst or a station chief to know an attack with mortars and rocket-propelled grenades, and which lasted for eight hours, is not a spontaneous demonstration,” he said, adding that the responses of the administration amounted either to a cover-up or gross incompetence.

Another layer of intrigue was added to the story Friday when the Associated Press reported that the CIA station chief in Libya told Washington within 24 hours of the attack that there was evidence it was carried out by militants. However, it was unclear who, if anyone, saw the cable outside the CIA at that point and how high up in the agency the information went.

Both Obama and Romney spent Friday campaigning before heading for their respective debate preparation camps, with Romney basing himself in Boca Raton.

Obama went to George Mason University in Fairfax, Virginia, the second time in a fortnight he has spoken on campus in the crucial swing state, where students and the youth vote as the key to his winning. He ridiculed Romney for what he claimed were repeated policy switches, saying the Republican candidate had forgotten his previous positions â€“ a condition he labelled ‘Romnesia’.

As well as Libya, Obama and Romney are set to argue over Iran, Syria and the Israeli-Palestinian issue. Obama administration officials have hinted that Obama, in his second term, with no election to be fought, would be braver in tackling the Israeli-Palestinian issue, which, like Tony Blair, he views as a source of friction in the Middle East and elsewhere in the Muslim world.

On Iran and Syria, Romney and Obama are not particularly far apart in terms of policy, despite Romney sounding more bellicose than Obama on both issues.

New polls taken after Tuesday’s debate, which both conservatives and Democrats gave to Obama on points, showed Obama ahead in Iowa, which has long been a swing state, and Wisconsin, which had been listed as an Obama hold but had recently been moved to a toss-up.

Most polls suggest the two are in a dead heat nationally. Gallup, in contrast with most of the rest, has Romney with a big lead nationally, on 52% to 45%. But Public Policy Polling has Obama on 48% to Romney’s 47% and Rasmussen has the two tied at 48%.