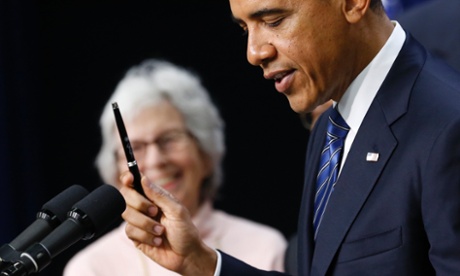 Barack Obama holds out his pen, saying he is ‘ready to sign’ a tax deal before Congress. Photograph: Kevin Lamarque/Reuters

BY:wen MacAskill in Washington for the guardian.co.uk, Wednesday 28 November 2012 22.19 GMT

Cracks in Republican opposition to tax rises for the wealthy grew bigger on Wednesday as Barack Obama increased pressure on the party to accept a deal to resolve the fiscal cliff crisis before the holidays.

Obama, emboldened by his election victory, proposed a bill to stop 98% of taxpayers facing automatic rises in January but imposing increases on the remaining 2% of the highest earners. Deep cuts in spending would be left until next year. “My hope is to get this done before Christmas,” he said.

Republican congressman Tom Cole, a former chairman of the national Republican congressional committee, broke ranks to say the party should accept Obama’s tax proposal. He went further even than three of his Republican colleagues who have said over the last week they might consider accepting rises.

But the Republican House speaker, John Boehner, shot down Cole, insisting that the party remained opposed to any such tax rises.

Boehner expressed optimism that a deal will eventually be reached. “We all know that we’ve had this spending crisis coming at us like a freight train and it has to be dealt with. And in order to try to come to an agreement Republicans are willing to put revenue on the table, but it’s time for the president and Democrats to get serious about the spending problem that our country has. But I’m optimistic that we can continue to work together to avert this crisis, and sooner rather than later.”

Obama is campaigning on the issue in a way that he failed to do during similar standoffs in 2010 and 2011. He devoted almost the entire day to the issue: meeting first with working-class and middle-class families that face tax rises in January if no deal is reached, discussing it at his first cabinet since the election and meeting with the chief executives of major companies.

On the surface, the Democrats and Republicans seem to be at polar opposites. The Republicans oppose tax rises for the wealthiest but are prepared to support revenue-raising measures, provided they are accompanied by deep spending cuts, including welfare benefits. The Democrats are adamant that taxes for the wealthiest must rise and are resisting cuts in welfare programmes such as Medicaid.

But there has so far been little of the harsh rhetoric that accompanied the 2010 and 2011 standoffs. The Republicans too appear less entrenched.

Cole, in television interviews, said that though he does not agree with raising taxes on the top 2%, he thought Republicans should accept the deal. He added that there were other Republicans ready to listen to the Democratic proposals.

But Boehner told reporters he did not agree with Cole. “He’s a wonderful friend of mine and a great supporter of mine, but raising taxes on the so-called top 2% â€“ half of those taxpayers are small business owners. You’re not going to grow the economy if you raise the top [2%] rates. It’ll hurt small business. It’ll hurt our economy.”

Obama, at his meeting with middle-class families, said: “We don’t have a lot of time here. We’ve got a few weeks to get this thing done.” He said if ordinary Americans mobilised to put pressure on the Republicans, “then I am confident we will get it done”.

He is to take his campaign on the road, heading to Pennsylvania on Friday, visiting the Rodon toy business that risks losing customers during the holiday period if people are worried about their taxes going up in January.

If there is no deal by 1 January, all taxpayers will experience rises as Bush-era tax breaks expire.

Obama said Congress could pass a law now that would prevent a tax hike on the first $250,000 of everybody’s income. Comprehensive spending cuts could wait until next year.

“Families and small businesses would, therefore, be able to enjoy some peace of mind heading into Christmas and heading into the New Year. And it would give us more time next year to work together on a comprehensive plan to bring down our deficits, to streamline our tax system, to do it in a balanced way â€“ including asking the wealthiest Americans to pay a little more, so that we can still invest in things like education and training, and science and research,” Obama said.