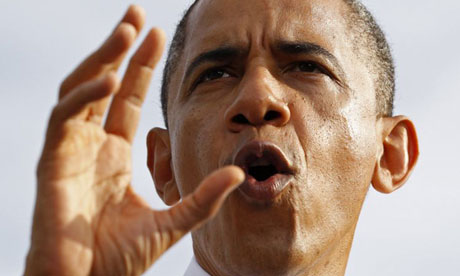 Rolling Stone has quoted the president describing his rival as a ‘bullshitter’. Cue outrage and hysteria from Republicans

â€¢ Truth be told, Barack Obama has probably already lost the votes of that portion of America scandalised by bad language. For one thing, his autobiography, Dreams From My Father, makes copious use of the word “motherfucker” â€“ while his rival, linguistically speaking, seems to inhabit a 1950s sitcom set among the clean-cut patrons of a milkshake parlour. (As governor of Massachusetts, one former colleague told the New York Times recently, Romney used to tell people to “go to H-E-double-hockey-sticks”, though he does indulge, the paper conceded, in “the occasional ‘crap’.”)

But now the coarseness chasm has widened. As an interview team from Rolling Stone were leaving the Oval Office earlier this month, that magazine reveals, “executive editor Eric Bates told Obama that he had asked his six-year-old if there was anything she wanted him to say to the president â€¦ She said: ‘Tell him: You can do it.'” Obama replied: “You know, kids have good instincts. They look at the other guy and say, ‘Well, that’s a bullshitter, I can tell’.” “Bullshitter” may not be “motherfucker” â€“ but as an insult directed at one presidential candidate by another, it’s this campaign’s high, or low, point, which makes it, in the immortal words of Joe Biden, “a big fuckin’ deal.” “The president is someone who says what he means and does what he
says,” Obama’s spokesman Dan Pfeiffer tried to clarify, urging
reporters not to get “distracted by the word”.

We can expect Romney’s media surrogates, in the coming days, to paint the president as classless and foulmouthed, though Romney himself was apparently simply too gosh-darned shocked by the news to comment, preferring to drown his sorrows, according to unconfirmed reports, in a delicious ice-cream soda. (With Diet Coke.)

â€¢ A recurring theme of the campaign has been the vigorous efforts, by some Republican supporters, to find ways to deny the reality of Obama’s narrow but steady lead in numerous swing-state polls and electoral college predictions. First came Unskewed Polls, a website that nudged results in Romney’s favour by â€“ and I’m simplifying, but only slightly â€“ adding a few more points to his totals.

Then came the rise of the “Nate Silver Truthers”, sceptics determined to find bias in the methods of the New York Times’s in-house polling geek, whose numbers are crunched almost entirely by (an evidently left-leaning) computer.

And now please welcome Townhall.com commentator Matt Towery, who’s convinced the polls are biased towards Obama because â€¦ some of them take 20 minutes to answer. “And what hardworking, productive member of a family, taking care of a business, house or family, has time to spare for such an opus? Likely not the type that fits the profile of a Romney voter.” Never mind that good models iron out such hypothetical biases by adjusting for polls’ past performance in predicting results. This new angle seems unassailable: polling itself is biased towards layabout Democrats! Next month: why “voting” isn’t really a trustworthy measure of how people vote.

â€¢ Where now for multimillionaire self-embarrasser, journalist-manipulator and Scotland-annoyer Donald Trump, after yesterday’s heartless announcement that he’d be withholding $5m from deserving charities unless the president did something he’d obviously never do? The New York property news site The Real Deal reports that Trump, who enjoys pretending to “fire” people, has been fired in a non-pretend fashion, after the board of one of his flagship buildings, Manhattan’s Trump Place, voted to replace the Trump Organisation as the building’s manager.

Still, he’ll always have the gossip columnists and the conservative rabble-rousers, right? Maybe not: the Fox News talking head Michelle Malkin responded to his latest stunt by calling him a “clown”, which is a bit like being called a “cantankerous vegetarian indie rock pioneer” by Morrissey; and now the veteran gossip writer Lloyd Grove has had enough, too. “At long last, you have made yourself irrelevant,” he writes, and vows, on behalf of his employer the Daily Beast, no further coverage of Trump’s antics for the foreseeable future. “Or, at the very least, before the November 6 election.” So a week and a half, then.