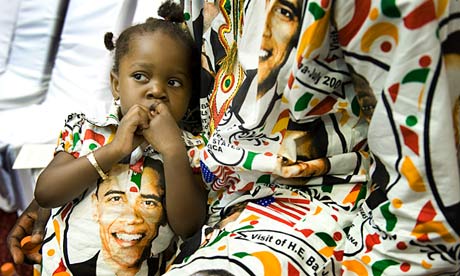 A Ghanaian girl and her father get ready to welcome Barack Obama in Accra in 2009. Photograph: Jim Watson/AFP/Getty Images

US president will be on diplomatic mission to make up for lost time, and some say the strategic neglect will cost America

And the winners are: Senegal, South Africa and Tanzania. Each will be rewarded for its democratic virtues next month when Barack Obama embarks on his first major presidential tour of Africa. The biggest loser? Kenya.

Not even a relatively peaceful election earlier this year is enough to tempt Obama back to his ancestral homeland. The big problem is the winner, Uhuru Kenyatta, who is facing charges of crimes against humanity at the international criminal court (no matter that the US is yet to sign up to the ICC).

At least the president will avoid jibes from Donald Trump about returning to his birthplace. Rubbing salt in Kenya’s wound will be Obama’s patronage of neighbouring Tanzania, which compares favourably in terms of ethnic harmony. Senegal, a key francophone ally for the US, also gets the presidential nod after a smooth democratic transition last year that was hailed as an “example for Africa”.

There will be immense relief in South Africa, the continent’s biggest economy, where an Obama no-show would have been regarded as a snub and fed paranoia that its pre-eminence was in jeopardy. On the day of Obama’s re-election last year, Lindiwe Zulu, international relations adviser to the president, Jacob Zuma, told the Guardian they would expect a visit “because if he doesn’t, we won’t forgive him for that!”

Obama’s first trip to South Africa since he came as a senator in 2006 also raises the prospect of a historically resonant encounter with Nelson Mandela before his 95th birthday in July. The august pair’s only previous meeting, eight years ago in Washington, was captured in a single photograph. But Mandela’s health now appears so frail that any photo opp will require delicate handling. Beyond the handshakes, pledges of mutual co-operation and traditional Zulu dancers, however, from 26 June to 3 July Obama and first lady Michelle will be on a diplomatic mission to make up for lost time. Many who hoped that the son of a Kenyan would give priority to the continent are disappointed that, after more than four years in power, he has spent less than 24 hours in sub-Saharan Africa â€“ a solitary visit to Ghana in 2009.

And instead of an eye-catching policy initiative, the White House came out last year with the US Strategy Toward Sub-Saharan Africa containing laudable but blandly impossible-to-disagree-with objectives: strengthen democratic institutions; spur economic growth, trade, and investment; advance peace and security; promote opportunity and development. The omission seems curious at a moment when the meme of “Africa rising” has swept through investment conferences, thinktanks and countless media commentaries. At the recent summit of the Brics developing economies â€“ Brazil, Russia, India, China and South Africa â€“ the talk was of a “new paradigm” and challenge to US-dominated institutions such as the World Bank. Has Obama taken his eye off the ball?

“He’s totally neglecting Africa,” says Koffi Kouakou, a Johannesburg-based political commentator who spent eight years in the US. “There’s not enough time to catch up. It’s a strategic neglect that is going to be costing America big time.

“The hope when he was elected was that he would put Africa on the map more than other presidents, but he’s been virtually invisible. Our expectations were too high. His visit now won’t have the same degree of reverberation as when he first became president.”

China, in particular, has been both a driver and beneficiary of Africa’s economic growth. It overtook the US as Africa’s biggest trading partner four years ago and its blunt infrastructure-for-minerals approach has won friends and influenced people. Some governments have welcomed a lack of “preaching” on human rights, pointing out that America’s own record is chequered.

The former Chinese president Hu Jintao made five trips to Africa as head of state, while his successor, Xi Jinping, sped to three resource-rich African countries just a month after taking over. The Asian giant has exercised soft power through building schools and hospitals. No wonder some have portrayed Africa as a microcosm of China’s future usurpation of the United States as the world’s dominant superpower.

Kouakou adds: “The Chinese are coming and the Americans are not taking this thing seriously. Even Britain is out of the game. They’re not engaged because of problems at home and the Chinese are having a field day.”