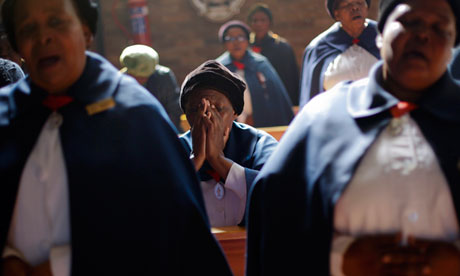 Nelson Mandela is in a critical condition in hospital, officials said on Sunday, leaving millions of South Africans fearing the worst.

The 94-year-old former president has been hospitalised four times since December but this is by far the gravest report on his health.

Mandela was taken to a hospital in Pretoria just over two weeks ago with a recurring lung infection but was said to have rallied after a few days.

“The condition of former president Nelson Mandela, who is still in hospital in Pretoria, has become critical,” the South African presidency said.

President Jacob Zuma and African National Congress (ANC) deputy president Cyril Ramaphosa visited Mandela on Sunday evening, the statement continued. “They were briefed by the medical team who informed them that the former president’s condition had become critical over the past 24 hours.”

Referring to Mandela by his clan name, Zuma said: “The doctors are doing everything possible to get his condition to improve and are ensuring that Madiba is well-looked after and is comfortable. He is in good hands.”

The ANC, the party that Mandela served throughout his political career, said it noted with concern the update on his condition.

Jackson Mthembu, its national spokesperson, said: “We welcome the work being done by the presidency to ensure that South Africans and people of the world are kept informed on the state of Madiba’s health.

“The African National Congress joins the presidency in calling upon all of us to keep president Mandela, his family and his medical team in our thoughts and prayers during this trying time.”

It emerged on Saturday that the ambulance that took Mandela to hospital on 8 June broke down. CBS News reported that Mandela had to be transferred in winter temperatures to another ambulance after waiting on the side of the road for 40 minutes.

On Sunday, the presidency addressed the issue, stating that Zuma and Ramaphosa were assured by doctors that “all care was taken to ensure that his medical condition was not compromised” when the engine trouble developed.

Zuma said: “There were seven doctors in the convoy who were in full control of the situation throughout the period. He had expert medical care. The fully equipped military ICU ambulance had a full complement of specialist medical staff including intensive care specialists and ICU nurses. The doctors also dismissed the media reports that Madiba suffered cardiac arrest. There is no truth at all in that report.”

Zuma appealed to the nation and the world to pray for Mandela, the family and the medical team attending to him during this “difficult time”.