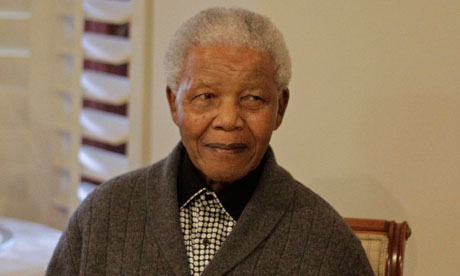 Nelson Mandela at his birthday celebration in Qunu earlier this year: the former president of South Africa has been admitted to hospital for tests. Photograph: Schalk Van Zuydam/AP

Former South African president Nelson Mandela has been admitted to hospital for medical tests, although the government said there was no cause for alarm.

A statement on Saturday from the office of the South African president, Jacob Zuma, gave no details of the condition of the 94-year-old anti-apartheid leader.

“Former President Mandela will receive medical attention from time to time which is consistent with his age,” the statement said.

“President Zuma assures all that Madiba is doing well and there is no cause for alarm,” it added, referring to Mandela by his clan name.

Mandela, who became South Africa‘s first black president after the country’s first all-race elections in 1994, was admitted to hospital in February because of abdominal pain but released the following day after a keyhole examination showed there was nothing seriously wrong with him.

He has since spent most of his time in his ancestral home in Qunu, a village in Eastern Cape province.

His frail health prevents him from making any public appearances in South Africa, although in the last few months he has continued to receive high-profile visitors, including former US president Bill Clinton.