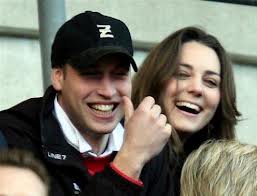 The British monarchy is embroiled in another photo scandal after the Wife of Prince William, Catherine, the duchess of Cambridge was snapped topless while on vacation in France.

The future King and her wife are saddened after the French magazine published images of them on the terrace of a private house in Provence , in which the Duchess of Cambridge is seen removing her bikini top.

Few weeks ago the younger brother of William, Prince Harry was snapped naked at a party in his Las Vegas hotel suit with the pictures resurfacing on the internet.
St Jamesâ€™s palace spokesman in a statement termed the images a grotesque and unjustifiable invasion of the coupleâ€™s privacy.

The statement reads, “The incident is reminiscent of the worst excesses of the press and paparazzi during the life of Diana, Princess of Wales, and all the more upsetting to The Duke and Duchess for being so.

“Their Royal Highnesses had every expectation of privacy in the remote house. It is unthinkable that anyone should take such photographs, let alone publish them.”

The couple were on a short vacation in France at the start of the 2nd week of September 2012 just before official trip to Southeast Asia.

The photos were taken Â as the prince and his wife were sunbathing by unidentified Photographer who took a series of shots of the Duchess after she removed her bikini top.

But the editor of French magazine Closer, which is running the images, has defended the move – and revealed she was offered even more explicit photos of the couple but declined to publish them.

Laurence Pieau tells Sky News, “We took the decision to publish a certain number of pictures. I won’t hide the fact that there are more intimate pictures that exist that we haven’t published and will not publish. Probably other newspapers will choose to publish them but that wasn’t our choice.”

Kateâ€™s bare breasts can be seen in eight of the shots while in another frame her naked bottom is pointing directly at the camera.

The royals have instituted a complaint at the local Tribunal de Grande Instance. The complaint is about a breach of private life. The royals need not be present at the hearing scheduled for Monday.

The editors and the photographers Â if found guilty they could be sentenced to a year in prison and a fine of up to Â£36,000.

Meanwhile the row over publication of photographs intensified on Saturday after the Irish Daily Star published the pictures in its Saturday edition. More other tabloids are likely to publish the pictures.