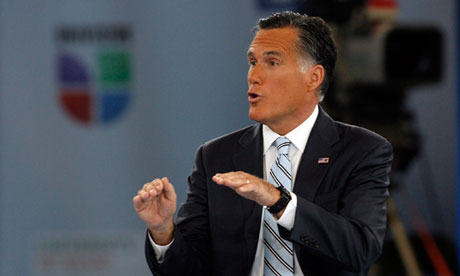 His disastrous summer has included a botched foreign tour, a mishandled response to the Middle Eastern crisis and the leak last week of a secret video from a private fundraising party where he lambasted many Americans as being “victims” of government aid who paid no income tax. The series of gaffes has seen the Republican challenger, Mitt Romney, fall behind President Obama in his long run for the White House.

Now the challenger is looking to the first presidential debate as a way of hauling his campaign back into contention.

The former governor of Massachusetts has already spent long hours preparing for the vital first duel with Obama, which happens on 3 October in Denver, the biggest city in the vital swing state of Colorado.

In the minds of many seasoned observers â€“ including some prominent Republicans who have gone public with their dismay at Romney’s performance so far â€“ something needs to happen soon to put him back in the contest. “The debate will be Romney’s last real chance to bring himself back into the race,” said Professor Scott McLean, a political scientist at Quinnipiac University.

Romney has certainly been taking his debate preparations seriously. He spent three days recently holed up in the Vermont estate of former Massachusetts deputy governor Kerry Healey in practice. During the questions and answer sessions the part of Obama was played by Ohio senator Rob Portman, a former contender to be Romney’s running mate.

The retreat, isolated among the forests and mountains of the rural north-eastern state, was also attended by most of Romney’s top campaign aides. Portman was chosen in part because he also played Obama in 2008 for the campaign of the then Republican candidate, John McCain. The Vermont retreat has been followed up by regular practices on the campaign trail, with Portman rejoining the candidate for further mock debates.

The tactic has been a change for Romney. During the long battle to secure the Republican nomination, Romney eschewed mock debates in favour of simply prepping with top aides on different subjects. But clearly the vital importance of the 3 October event has prompted a change in tactics to try to create a “game-changing” moment.

The Romney campaign has also started to pivot more to the centre in public, perhaps in a bid to counter last week’s video release and also a barrage of negative ads from the Obama campaign and its supporters that have successfully portrayed him as a wealthy, out-of-touch elitist. However, given Romney’s strong tack to the right during the nomination race, such a manoeuvre would be difficult to pull off.

It is sure to be something Obama will bring up in the Denver debate as a sign of flip-flopping on key issues. “That change of strategy is going to be one of the Romney campaign’s biggest problems. Obama will be ready for him,” said McLean.

There are also doubts about Romney’s debating skills. Though he participated in no fewer than 19 debates during the nomination process, there were times when he made gaffes or appeared goaded by opponents into losing his cool, such as spontaneously offering to make a $10,000 bet with the Texas governor Rick Perry. “He seems to be somewhat thin-skinned,” said Professor David Cohen, a political scientist at the University of Akron.

Such moments are sure to have been studied in great detail by the Obama camp. Exact specifics of the president’s debate preparations have been kept largely secret, but it has been reported that Massachusetts senator John Kerry has been playing the role of Romney in mock events held in Washington. Other sessions have included senior campaign advisers like David Plouffe and former aide Anita Dunn. Though Obama has not had to engage in a real debate since the 2008 campaign, he is widely seen as a skilled practitioner of the vital art. “He is smart, smooth and extremely calm. He seems not to get rattled. He is a very good debater. There is no disputing that,” said Cohen.

But a debate is not simply a straight match-up of skills. A vital part of who wins or loses depends on the expectations of the audience. Many people point to the vice-presidential debate of 2008, which pitted Sarah Palin against Obama’s running mate Joe Biden. Palin was seen as such a poor potential debater that when she managed to get through the ordeal without any major gaffe it was seen as a victory by many observers. In this case the Romney team have an advantage in that they are seen as an underdog. Thus if Romney beats those expectations, or a complacent Obama stumbles, it could turn into a genuine opportunity for the Republican to claw back Obama’s lead.

Experts certainly see that lead as still vulnerable. Hamstrung by a still sickly economic recovery, high rates of joblessness and a disillusioned activist base, Obama’s lead in the polls is not a chasm, despite a Romney campaign that has been engaged in nearly non-stop damage control for weeks on end. At the end of last week Clarus Research’s national poll average had Obama beating Romney by just three points. The picture was more favourable for Obama in the individual swing states that will decide the election, but no one is predicting any sort of blow-out victory for the Democrats. “It remains a close race. I look at the numbers and a lot of the data suggests that this race will tighten again,” said McLean.

The Obama team have already been trying to spin that expectations game. Last week they sent out a memo to campaign journalists extolling Romney’s virtues at debating and saying that the Republican clearly fancied his chances. “He’s obviously banking on flawless performances in October to achieve the turnaround his campaign has projected,” wrote Obama campaign manager Jim Messina.

That is probably a deliberate exaggeration. But most experts do think that the many instant media pundits who have spent last week writing Romney’s political obituary have jumped the gun. As the riots in the Middle East, inspired by an anti-Islamic film shot in California, have shown, unexpected and dramatic events are likely to still play a key role in deciding who sits in the Oval Office next year. As far as the Romney campaign is concerned, they will be going all-out to make sure that the first debate is one of them.

Nor will it be their last chance. Two more debates will rapidly follow as the election enters its final weeks, with one touching on foreign policy and another held in a “town hall” format where questions will come from undecided voters who are members of the public picked by pollster Gallup. In all three debates the viewing audience is virtually guaranteed to be tens of millions of Americans.

“I am definitely going to get my popcorn out for these debates,” said Cohen.

11 August Mitt Romney announces Paul Ryan, a Wisconsin congressman and House budget chairman, as his vice-presidential candidate. Statistical analysis of his voting record led commentators to state that Ryan was the most conservative Republican member of Congress to be chosen as running mate “since the turn of the 20th century”. A USA Today/Gallup poll found that 39% thought Ryan, a Roman Catholic who described himself “as pro-life as a person gets”, was an “excellent” or “pretty good” vice presidential choice, compared to 42% who felt he was a “fair” or “poor” choice.

15 August Obama is forced to defend his vice-president, Joe Biden, against criticism of the latter’s remarks on a planned Republican repeal of Wall Street regulations. Biden made the comments in Danville, Virginia. Hundreds of black people were in the audience when Biden added: “They’re going to put y’all back in chains.” Obama said Biden’s remarks meant consumers would be worse off if the Republicans succeeded in doing away with new restraints on financial institutions. “In no sense was he trying to connote something other than that,” Obama added.

11 September Former president Bill Clinton begins a week-long tour of battleground states across the US to help Obama’s re-election campaign less than a week after his barnstorming speech to the Democratic national convention. Clinton is credited with firing up parts of the Democratic base that have proved resistant to Obama, particularly white, working-class males.

17-18 September A secret video of Romney, taken from a fundraiser, emerges showing the Republican saying Palestinians are committed to Israel’s destruction. He tells donors the Middle East will “remain an unsolved problem… and we kick the ball down the field”. Romney also said almost half of Americans “believe that they are victims”. Romney stood by his comments that 47% of Americans who do not pay income tax support President Barack Obama and would never vote for him. “Those that are dependent on government and those that think government’s job is to redistribute, I’m not going to get them,” he told Fox News, describing redistribution as “an entirely foreign concept”.

21 September At the end of a miserable week for Romney, fundraising figures reveal Obama has $88m available to spend on advertising and campaign staff compared with the Republicans’ $50m, of which $15m is a loan Romney has to repay, as the campaign enters its final six weeks. Some senior Republican figures are said to have given up hope of retaking the White House as a result.